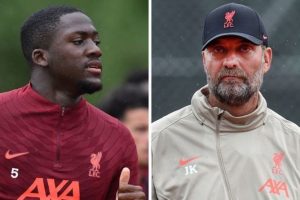 Liverpool boss Jurgen Klopp has confirmed that Ibrahima Konate will make his first appearance for the club on Tuesday, but insists the centre-back still needs to change some “little habits”. Konate is Liverpool’s only new signing this summer so far with around a month until the Premier League campaign kicks off.

Most players have all joined up with the squad now in Austria for the start of pre-season training with matches to start from next week.

They will get their first taste of competitive action on Tuesday in back-to-back 30-minute matches against Wacker Innsbruck and VfB Stuttgart.

And Klopp has confirmed Konate will play some part in what will be his first appearance in a Liverpool kit.

But the German head coach admits that Konate has a few habits that he needs to change to adapt to how things are done at Liverpool.

“Tuesday. He’s had a good rest, had a normal pre-season so far, so yeah, he can play on Tuesday,” he told Liverpool’s official website.

“For Ibou it is important that he gets minutes quickly, that’s what pre-season is for.

“There are some little habits where he is doing different to what we usually do, so we work on that but that’s now not that easy because that’s only six days now.

“So, all fine, completely normal. The first few days are there to realise what is the boy doing when he is not thinking.

“Then we will see how quickly we can get all this information together for him and then everything is fine.

“For a defender it’s not as difficult as it would be for other players but it’s still a job to do, and that is what we are doing.”

Virgil van Dijk, Trent Alexander-Arnold, Joel Matip and Joe Gomez are all currently undergoing individual training regimes to work on their fitness for the start of the season.

Klopp insisted that none of the defenders are currently injured anymore with no setbacks on their recuperation.

Matip and Alexander-Arnold are in contention to play on Tuesday, but Gomez and Van Dijk are unlikely to be risked.