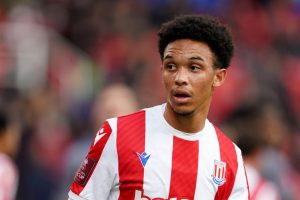 Arsenal legend Ian Wright's grandson made his professional debut for Stoke City in their FA Cup third round win over Leyton Orient.

D'Margio Wright-Phillips – son of former Manchester City and Chelsea ace Shaun – is the third generation of the famous footballing family to make it in the professional game.

Uncle Bradley also enjoyed a long playing career with the likes of Southampton, Charlton and New York Red Bulls, where he formed a notable strike partnership with Thierry Henry.

D'Margio, 20, has been making waves in Stoke's U-23 side this season, scoring four times and providing four assists in 12 matches since making the switch from Manchester City.

Dad Shaun is thought to be around aged 40.

Even Championship sides like the Potters tend to make changes for the FA Cup, and Wright-Phillips Jr. was handed his debut at home to the League Two Os.

Wright-Phillips Jr. impressed as Stoke eased past Orient 2-0 to reach the fourth round, with fans taking to social media to praise the youngster's contribution.

Who's the most famous father and son combo in football? Let us know in the comments section.

One Potters fan wrote: "Definitely some positives, Wright-Phillips and Doughty look lively but we’ve definitely made the game look like hard work."

Someone else described his performance by saying: "Bright, took up lots of good positions, needed ball into him a bit quicker, lots of potential."

While another supporter beamed: "D’Margio Wright-Phillips looking like the most creative player we have at the moment."

The winger lasted 84 minutes before being substituted for Emre Tezgel, who at 16 became Stoke's youngest ever player following his introduction.

The future looks bright for D'Margio, who has revealed he learned a lot from training alongside Raheem Sterling during his time at the Etihad.

"He’s done phenomenally for the past three, four years in his position.

"That’s what I can kind of relate to and off the pitch, he’s such a nice guy and genuine.

"He’s always working hard. That’s what kind of drove me.

"I trained with him a couple of times and learned a few things off him – and that’s why my left foot’s better."

He said: "He’s another forward that is a little bit different from what we have at this minute in time.

"We’re excited by his progress."