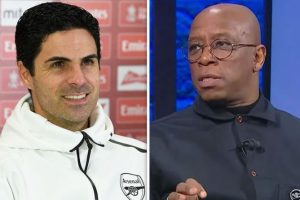 Arteta comments on Arsenal transfer plans ahead of January window

Arsenal legend Ian Wright would love to see his former club bring Georginio Wijnaldum back to the Premier League. Wijnaldum has been linked with a move to Arsenal after struggling for game time at Paris Saint-Germain. The Holland international only left Liverpool last summer to join the Ligue 1 giants.

Arsenal boss Mikel Arteta has confirmed he is trying to sign a midfielder this month.

Granit Xhaka and Albert Sambi Lokonga are the only two senior midfield options at Arteta’s disposal.

Thomas Partey and Mohamed Elneny are at the Africa Cup of Nations and Ainsley Maitland-Niles is joining Roma on loan for the remainder of the season.

And Wright believes Wijnaldum, who won the Champions League and Premier League at Liverpool, would be the perfect loan signing this month.

JUST IN: Newcastle hoped to keep second signing ‘under wraps’ amid new development

Speaking on the Kelly & Wrighty Show, Wright said: “People obviously like Thomas Partey going away, you do need to then maybe bring in… Wijnaldum, I saw Wijnaldum’s name.

“That would be amazing. A loan signing from PSG.

“Someone like that in the midfield, experienced, he’s a Premier League winner, just to help with the youngsters and someone like a Sambi Lokonga, just to keep it going.

“Then they can just start adding on to the squad.”

Wright believes it is a necessity that Arsenal strengthen in midfield and says Wijnaldum could even earn a permanent move if he impresses.

“We’re going to need to do something, simply because Ainsley Maitland-Niles is looking like he is going to go off on loan, Thomas Partey’s gone,” Wright continued.

“So we’re going to need something in there. So I know I just mentioned it, I hope we can try and get Wijnaldum.

“Simply because we need that cover, we need that calibre of player as cover. He’s somebody of his experience, he’s only going to bring goodness to the team.

“If he comes back [to the Premier League] in this period, he’s coming on loan. So he himself is thinking ‘can I impress? Can I blast myself into this team?’.

“Then if you come and you impress then you think ‘yeah we’ll buy him’ because he’s got a place in this team.

“He’s the kind of player, I wouldn’t be averse to seeing him in the Arsenal squad, absolutely not.”