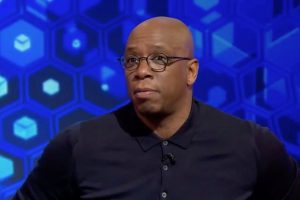 Ian Wright has given his prediction on what will go down at Old Trafford this Sunday afternoon.

It comes as Manchester United prepare to host Liverpool in a crucial Premier League clash with the top four the main aim.

Jurgen Klopp must get three points here to uphold some sort of pressure on fourth-placed Chelsea.

They sit seven points behind Thomas Tuchel's men, with his compatriot looking like he has got a tune of the Blues since his January arrival.

With the Stamford Bridge outfit in brilliant form, any further slips could be detrimental to Liverpool in their attempts to play in the Champions League next season.

It would have been unthinkable at this point last year to think that the Reds would capitulate quite like they have.

After winning the Premier League, many were gearing up for a period of domination from Klopp's men – but that has failed to transpire.

As for United, they have gathered momentum as the season went on and look assured for a spot in the top four.

Led by the brilliant Bruno Fernandes, the Red Devils have got the result when it most matters – despite their regular slow starts.

But Arsenal hero Wright believes it will be the visitors walking away from Old Trafford with all three points.

He said on The Kelly and Wrighty Show: "Even though you’d have to say Manchester United are going to make the Champions League, Ole Gunnar Solskjaer needs to win a trophy.

"I think that’s going to be in the forefront of his mind so I’m going with Liverpool.

"I think it’s vitally important for Liverpool to win the game because they need to get themselves back in the Champions League race.

"It’s good there’s so much on this game because there’s been a few draws recently and sometimes it hasn’t lived up to the hype. I think this one has got the potential to be very good."