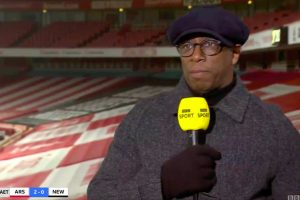 The holders were made to wait for their win, with Emile Smith Rowe and Pierre-Emerick Aubameyang scoring in the closing stages of extra time in the 2-0 win.

It was only after the introduction of Smith Rowe that the Gunners looked anything like the said that had won three Premier League games on the spin.

Prior to that, the hosts look laboured and struggled to create chances against a miserly Magpies defence.

Mikel Arteta brought Pepe and Willian back into the XI, after trusting youth to turn around their league form.

And Wright claims that the two wingers, failed to take their chance, giving Newcastle a chance to dump them out of the competition.

“Very, very poor from him today [Pepe]. Same with Willian,” Wright told BBC Sport. “These are two players we needed a lot from, and we are just not getting it, to be honest.

“In the end, Mikel Arteta had to being on his best guys because the guys he brought in, just didn't do it in the first half. That was the opportunity for Newcastle to take advantage but they just didn't have the quality.”

It's the latest in a long line of struggles for Willian, who has struggled for any consistency since he left Chelsea in the summer window.

But Arteta is sticking by his signing, claiming a number of outside factors are behind his below-par performances in an Arsneal shirt.

"I think he was improving and improving," Arteta said, after the game. "He's been out as well because he was ill. He missed two weeks of training and football.

"He had some good moments and other moments where he needed more help. We're going to keep trying with him."

Can Arsenal win a major trophy this season? Have your say below.