Home » Soccer » ‘I think it’s a goodbye’: Hazard admits he is likely to leave Chelsea

‘I think it’s a goodbye’: Hazard admits he is likely to leave Chelsea

‘I think it’s a goodbye’: Eden Hazard admits he is likely to leave Chelsea this summer after spearheading their crushing win against Arsenal in Europa League final

Eden Hazard has admitted his starring role in Chelsea’s Europa League win over Arsenal is likely to be his last game for the club.

Speaking immediately after Chelsea crushed Arsenal 4-1, Hazard tried to stay coy over questions on his future before saying: ‘I think it’s a goodbye, but in football you never know.

‘My dream was to play in Premier League. I did this for seven years. Maybe now it’s time for a new challenge.’ 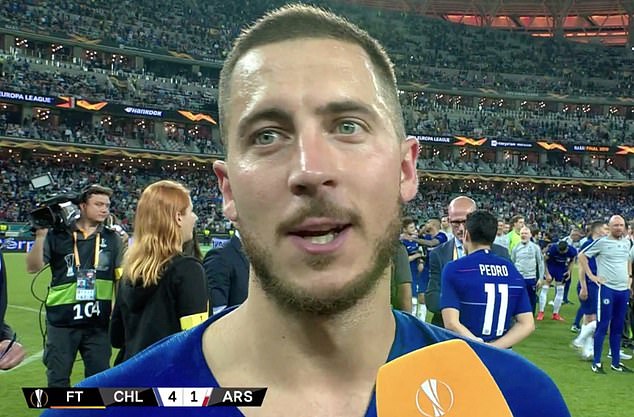 “I think it is a goodbye, but in football you never know.” ?

“Now maybe it is time for a new challenge.” ?

Eden Hazard reveals a decision HAS been made on his Chelsea future… pic.twitter.com/fqNNeIhCxP

Hazard is widely expected to be the marquee signing in Real Madrid’s impending summer overhaul lead by manager Zinedine Zidane.

But when he was first grilled about where he will be playing next season, Hazard insisted he was still to make a choice.

‘I don’t know yet. I think we will decide in a few days. My target today was to win the trophy and that is it,’ he said.

But when the question was repeated by BT Sport’s Darrell Currie, Hazard confessed that he is most likely to go.

‘I talk about my decision already. I said that two weeks ago. Now it depends on the club, both clubs.

‘I’m just waiting like you wait, the fans wait, we will know in a couple of days. I think it’s a goodbye, but in football you never know.’

Hazard expanded on his thoughts in a separate interview, saying: ‘I want a new challenge like I said last year after the World Cup but it didn’t happen.

‘So now it’s between both clubs. So I will see. I am still waiting, like you are waiting, and the fans are waiting. So we will see in a couple of days.’