Home » Soccer » I am here to win the Champions League again, says Messi

I am here to win the Champions League again, says Messi 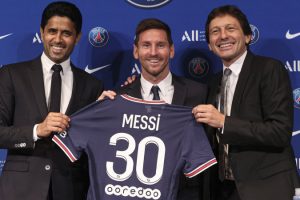 The Paris Saint-Germain president, Nasser Al-Khelaifi, brushed off suggestions on Wednesday that his club could breach UEFA’s Financial Fair Play rules over the signing of Lionel Messi, signalling that the plan launched 10 years ago to curb debt and spending is now regarded as obsolete by the elite it once sought to control.

The greatest footballer of his generation gave his first press conference as a PSG player alongside Al-Khelaifi at the Parc des Princes in front of a global audience, with Messi, 34, declaring that he had come to Paris to win the fifth Champions League title of his career.

Of those selected to ask questions, only the BBC from the world’s media asked whether PSG could afford to sign Messi under the FFP regulations that require clubs licensed to play UEFA competitions to show that they have broken even within a small loss margin. Al-Khelaifi, 47, the chairman of Qatari Sports Investments, which has owned PSG since 2011, said that his club would have signed Messi only had they been able to do so under FFP regulations

“We will always fulfil FFP and before we do anything we check with our commercial and financial and legal people,” he said. “Now you see that we sign him, that we have the capacity to sign him. Today you can see what Leo has brought to the club is huge. What you in the media need to focus on is not just the negative.

“There’s a lot of positive he is bringing to the club … social media. It’s a big asset. The club increases in every part, commercially. We will give you some numbers and you are going to be shocked. I hope Leo does not ask for more salary! We will always fulfil the FFP regulations.”

In June last year, as the COVID-19 lockdowns across Europe that prevented fans from attending games wiped millions off club revenues, UEFA made fundamental changes to FFP. The last two seasons will be assessed as one FFP reporting period and owners were permitted to invest their own funds to cover losses, muddying the clear break-even rules that have caught out clubs, including PSG, in the past. It indicated that UEFA had other priorities as the pressure on finances of some highly leveraged clubs reached breaking point. 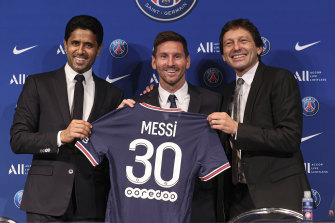 The governing body has estimated lost revenue across top-flight clubs alone in its 55 member nations over the two previous seasons at £6.1 billion ($11.5m). There is now a greater will for UEFA to base cost control measures on real-time spending events rather than retrospectively examining finances and attempting to apply penalties that way. The European Super League breakaway that continues to divide the biggest clubs is considered a much more critical threat than the overspending of fossil fuel-rich club owners.

By the time that the impact of Messi’s arrival at PSG is assessed by UEFA, the successor to FFP is likely to be well developed. Al-Khelaifi will be central to that as the new chairman of the European Club Association, a position he inherited after the Super League meltdown, of which PSG were not a part. UEFA is also worried about potential for conflict of interest with private equity deals and leagues such as the 10 per cent stake sold by Spain’s La Liga to the investor CVC.

Upon Messi’s arrival, the French media preferred to focus on the scale of the coup for PSG in securing the player whom Barcelona could no longer afford to contract. Messi himself, accompanied by his wife Antonela Roccuzzo and their three children, spoke enthusiastically about wanting to train with his new teammates for the first time. He emphasised on more than one occasion that he was in Paris to add to the many trophies he won with Barcelona.

Speaking about the Champions League, he said it was his “dream” to win it again. He said: “I think Paris is the best place to have a chance to win it again.” He added that his enthusiasm was undimmed by the dazzling success he had already enjoyed. “What I can say today is that I have the same will and enthusiasm as when I was a kid. I still feel like this kid. I am going to give my best to achieve my goals. 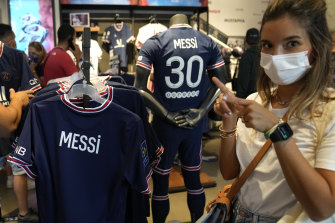 A PSG fan poses with the Argentine star’s new shirt at the club’s official store.Credit:AP

“I love to win. I want to have important goals. I know that my goals and PSG’s goals are the same and want to be bigger and bigger.”

He was also eager to point out the qualities of the squad he has joined, that includes French star Kylian Mbappe and Messi’s former Barcelona teammate, the Brazilian Neymar. “The entire dressing room… these are the best players in the world in all positions. It’s incredible to be able to experience this,” Messi said. “It is a great squad and I hope I will play my part in achieving the goals of PSG.”

Al-Khelaifi had a word for Mbappe, whose future remains in doubt with just one year left on his deal. “He [Mbappe] wants to win trophies, he has said that. He wanted a competitive team and I think we have the most competitive in the world. There is no excuse. He cannot do anything but stay.”