Home » Soccer » Hungary vs France live stream: How to watch the Euro 2020 fixture online and on TV today

Hungary vs France live stream: How to watch the Euro 2020 fixture online and on TV today 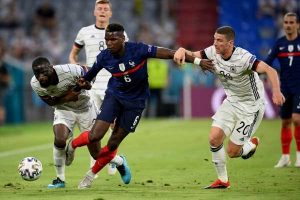 France face Hungary in their second fixture of Euro 2020 at the Ferenc Puskas Stadium.

The world champions got their tournament off to the best possible start when they defeated Germany 1-0 thanks to a Mats Hummels own goal.

Kylian Mbappe and Karim Benzema both scored goals later ruled out for offside by VAR.

As for Hungary, they held Portugal for 83 minutes before Raphael Guerreiro scored a deflected opener and Cristiano Ronaldo netted a double.

The fixture will kick-off at 2pm BST at the Ferenc Puskas Stadium.

The match is live on BBC One with coverage starting from 1:15pm BST. It can also be streamed online via BBC iPlayer.

France right back Benjamin Pavard completed the full 90 minutes despite saying he was unconscious after a collision with Germany’s Robin Gosens. He is expected to be cleared to play, but Leo Dubois is on hand if needed.

Daniel Gazdag missed the opening loss to Portugal, and he has pulled out of the team for the rest of the tournament. Roland Sallai will likely start with captain Adam Szalai in attack, with Szabolcs Schon coming off the bench once more.

Hungary really impressed me with their bravery, ambition and resolute defending against Portugal, but they fell apart at the end. France will overwhelm them as Ronaldo and co. did. 3-0 France.