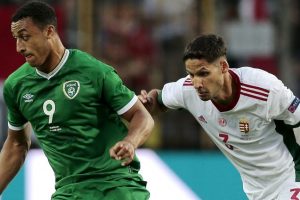 Report and free match highlights as Gavin Bazunu and Caoimhin Kelleher play a half each in goal in the Republic of Ireland’s draw with Hungary in Budapest; the hosts are denied a fourth successive win ahead of their Euro 2020 campaign

Gavin Bazunu and Caoimhin Kelleher staked their claims for the goalkeeper’s shirt as the Republic of Ireland fought out a 0-0 draw with Euros-bound Hungary.

19-year-old Manchester City keeper Bazunu and Liverpool counterpart Kelleher, 22, played a half each in front of a passionate crowd at the Szusza Ferenc Stadion in Budapest.

Ireland players were met with boos and jeers from the home fans after they took a knee before kick-off, while the Hungary players stood and pointed to their sleeves which were sporting UEFA’s respect campaign logo.

Bazunu denied striker Adam Szalai and Kelleher the same man twice and defender Attila Szalai as they each attempted to persuade manager Stephen Kenny that they can push Darren Randolph for the number one spot.

In the process, they denied the Hungarians a fourth successive win with which to head into the finals, and they might even have condemned them to a first defeat in 11 had John Egan’s fifth-minute header crept under the crossbar rather than cannoned back off it.

Kenny will reflect upon a performance which was characterised by impressive organisation, but perhaps not as much of the passing game on which his philosophy is based, although on the back of his first win as manager in Andorra on Thursday evening, he can be satisfied with a positive end to the season.

Opposite number Marco Rossi must now steel his players for what lies ahead as they prepare to launch their Group F campaign, which will also pitch them into battle with France, Germany, and then against Portugal next Tuesday. 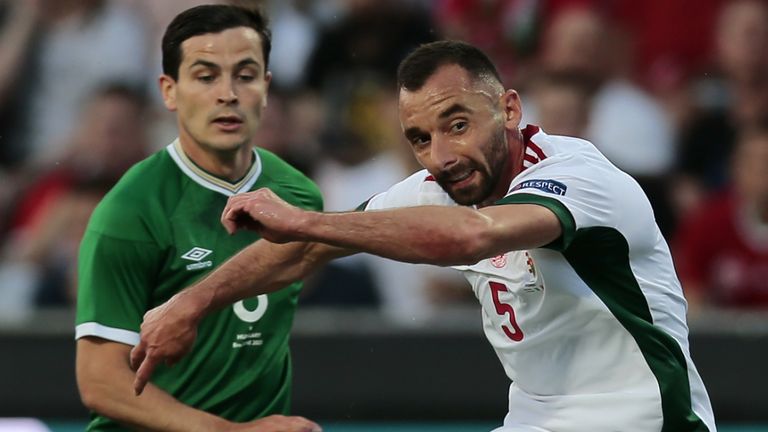 The return of Shane Duffy in one of two changes to the team which started in Andorra – striker Adam Idah was the other – prompted a shift to a central defensive three, and it was a member of that trio which very nearly made a swift impact at the other end.

Skipper Egan attacked Josh Cullen’s fifth-minute free-kick and was unfortunate to see his firm header come back off the woodwork.

However, the traffic headed largely towards the visitors’ goal in the early stages and Laszlo Kleinheisler served Bazunu with a warning when he skied an attempt over after a 10th-minute cross had been cleared to the edge of the box.

Ireland were pinned back inside their own half, with Cullen and Conor Hourihane seeing too little of the ball to feed the men ahead of them from midfield, leaving Troy Parrott and Idah isolated for long periods.

But for all their possession, the Hungarians were struggling to pierce a well-organised Irish defence and Bazunu was largely untroubled.

However, the teenager was called upon for the first time to claw away Adam Szalai’s 39th-minute header, and he needed Hourihane’s help to clear Akos Kecskes’ attempt from the resulting corner as the first half ended with a flurry of activity, but with the deadlock unbroken. 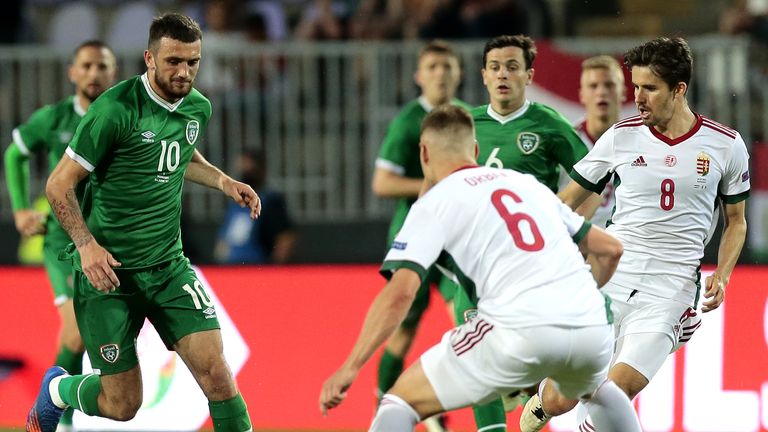 Bazunu’s work was done and he was replaced by debutant Kelleher at the break, and although neither side could create much of note in a scrappy start to the second half, the Liverpool keeper had to be at his best to palm away Adam Szalai’s fierce 55th-minute snapshot.

Ireland were playing noticeably higher up the pitch and the game became more open as a result, and substitute keeper Adam Bogdan had to make a solid save to keep out Idah’s skidding 68th-minute drive.

Had it not been for Kelleher, who acrobatically tipped over Adam Szalai’s 82nd-minute header and Attila Szalai’s shot seconds later, the visitors would have left empty-handed, although they could have won it too after substitute Chiedozie Ogbene fired into the side-netting seconds after becoming the first African-born player to make a senior debut for the Republic.

Tuesday’s game was Hungary’s last before they begin their Euro 2020 campaign against reigning champions Portugal on June 15 in Group F. The Republic of Ireland will not play again until next season, when they also face Portugal in World Cup Qualifying on September 1.