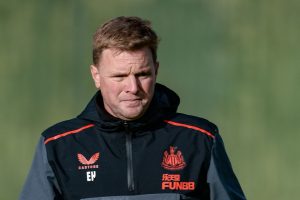 Newcastle have been dealt a huge blow in their pursuit of Umar Sadiq after Almeria placed a whopping price tag on their star striker.

Eddie Howe was denied the chance to oversee his first match in charge of the Magpies at the weekend after testing positive for Covid last week.

The former Bournemouth boss was appointed as the club's new manager earlier in the month after Steve Bruce was sacked back in October, shortly after Newcastle's mega-rich Saudi takeover was completed.

The new owners replaced Bruce with Howe in their first major move after outlining their intentions to bankroll the north east club in a bid to win major honours and establish Newcastle as a global footballing powerhouse. Despite picking up a point in a thrilling 3-3 draw with Brentford on Saturday, the winless Magpies slipped to bottom of the Premier League table as Norwich claimed a vital win over Southampton.

Newcastle's new owners are expected to heavily invest in the squad when the January transfer window opens as their immediate attention turns to avoiding relegation, but hopes of adding more firepower have been dealt a significant blow.

The Geordie club are reportedly keen to bring Nigerian forward Sadiq to St. James' Park in January and value him at £15m, however, the fee is way off Spanish side Almeria's valuation.

Would Umar Sadiq be a good signing for Newcastle in January? Let us know in the comments section below.

According to Mundo Deportivo, the Segunda Division team are demanding a staggering £50m for the 24-year-old former Rangers hitman – a mammoth £35m more than Newcastle were hoping to pay.

Sadiq has lit up the Spanish second division so far this season hitting seven goals and registering six assists within 16 league appearances as Almeria have established an eight-point lead atop the Segunda Division standings.

With the Andalusian outfit pushing to secure promotion back to La Liga for the first time since the 2014-15 season, they don't have any intention of selling their main goal-getter hence the eye-watering price tag.

And if that wasn't all, reports in Spain suggest the Magpies face competition for Sadiq's signature from none other than Barcelona, as they look to replace striker Sergio Aguero – who has been forced to retire due to heart complications.