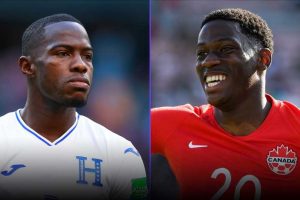 Canada looks to boost its chances for a historic qualification to the 2022 FIFA World Cup and also exorcise some old demons as it travels to San Pedro Sula to take on Honduras in CONCACAF World Cup qualifying on Thursday.

Les Rouges, who lead the CONCACAF table after eight matches, could solidify their standings position with a win — or even a draw — and a positive result would also help Canada replace the bad memories of recent trips to Honduras.

The Estadio Olimpico Metropolitano is the site of some of the most painful World Cup qualifying moments for Canada. In 2012 a heavy 8-1 defeat in Honduras cost Canada a spot in the final round of qualifying. Then four years later, a narrower 2-1 loss saw Canada once again fail to advance.

This time, it’s Canada with a chance to deliver the pain. Leading the CONCACAF table, a victory for the visitors would all but doom Honduras, which sits bottom of the Octagonal and needs every point it can muster from the 18 that remain on offer (six matches). A Honduras loss coupled with wins by all top four sides, would put Los Catrachos on the cusp of mathematical elimination.

But Canada will be a different team without star Alphonso Davies, who is down for an indefinite amount of time with mild myocarditis stemming from a recent bout with COVID-19. Missing its most talented player and its most influential midfielder (Stephen Eustaquio), and facing an opponent on the ropes in a hostile environment should represent a real test for the Canadians.

* = The top three teams earn direct berths to Qatar 2022, while fourth place will head to an intercontinental playoff against a nation from Oceania.

How to watch Honduras vs. Canada

Thursday’s CONCACAF World Cup qualifying match between Canada and Honduras from the Estadio Olimpico Metropolitano in San Pedro Sula will be broadcast on OneSoccer, Sportsnet and RDS in Canada and streamed on Paramount+ in the USA.

Death, taxes, and Maynor Figueroa in the Honduras starting lineup. Despite being cut by Houston Dynamo earlier this month, the 38-year-old center back was called up and looks set to make his 179th appearance for Los Catrachos alongside Denil Maldonado. This World Cup qualifying cycle could be a swansong for Figueroa, who made just 14 MLS appearances last season and is in the twilight of his career.

One veteran the team does appear to be moving on from is midfielder Boniek Garcia (138 caps), who also left Houston this month and was not called into the squad. Instead, Greece-based Alfredo Mejia and Colorado Rapids man Bryan Acosta will likely continue as the first-choice midfield pairing, supported by either Kervin Arriaga or Edwin Rodriguez in front of them.

It’s unlikely that Canada head coach John Herdman will change much from the 2-1 win over Mexico in November, outside of the forced change to replace Alphonso Davies, who is unable to suit up due to a mild case of post-COVID myocarditis. Davies plays fullback for Bayern, but he has been consistently deployed higher up the pitch for Canada, meaning others will have to pick up the slack in attack.

Herdman definitely has options up top with the likes of Cyle Larin, who needs just one goal to become Canada’s all-time leading goalscorer, and in-form Lille top scorer Jonathan David. New Club Brugge player Tajon Buchanan did well to replace Davies at the 2021 Gold Cup, and veteran Junior Hoilett is also an option to start.

At the back, Wake Forest product Alistair Johnston continues to be solid in defense, alongside club teammate Kamal Miller, while steady presence Steven Vitoria could get the nod over Doneil Henry at the center of the three-man back line. Atiba Hutchinson, now the nation’s most-capped player (90), is likely to continue with the armband and assume a spot in midfield with Jonathan Osorio and Mark-Anthony Kaye, two potential options to partner with him, especially given starter Stephen Eustaquio is still out due to COVID-19 protocols.