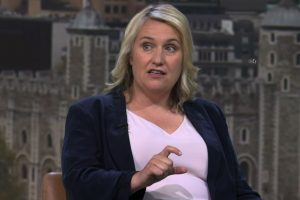 Chelsea Women’s head coach Emma Hayes has been added to ITV’s coverage for England’s Euro 2020 against Denmark on Wednesday evening.

Hayes will be a pitch-side and will be covering the game alongside the likes of Roy Keane, Gary Neville and Ian Wright, according to The Telegraph, who also say she’ll be involved in commentary for the match.

The 44-year-old has been praised for her coverage and commentary throughout the tournament and her insight during Spain’s second round match against Croatia was particularly noted as a high point during ITV’s coverage.

She made her debut at Euro 2020 during the Group C game between Austria and North Macedonia and has provided both commentary and studio analysis since, sharing her thoughts in an easy and comprehensible manner.

Her tactical knowledge and ease in expressing her ideas have made for a pleasant viewing.

During Poland’s match against Slovakia, she explained tactical concepts and highlighted the role and importance of Robert Lewandowski while also providing knowledge on how Poland could break Slovakia’s low defensive line.

Wright himself has been a fan of Hayes’ coverage, tweeting about it earlier in the tournament: “Just listen to Emma Hayes feeding us insight and knowledge; Elite.”

Ahead of Spain’s match against Croatia, a tweet was shared by the Sport Bible’s Jack Kenmare highlighting the detail Hayes goes through in preparation for her coverage.

Hayes had prepared presentations of tactical details for both teams which included images and notes to aid her while she was discussing the game on live television.

Research from OLBG’s Commentator Rankings have found that Hayes has been the most popular pundit during this tournament amongst UK viewers.

What have you made of Emma Hayes' coverage so far? Let us know in the comments below.

In addition to her punditry, it was just last week that Hayes signed a new contract to extend her stay with Chelsea’s Women, having enjoyed a successful season where the Blues won a second-successive league title as well as the League Cup and reached the Champions League final where they lost to Barcelona.

She was also named the FA Women’s Super League Manager of the Season.