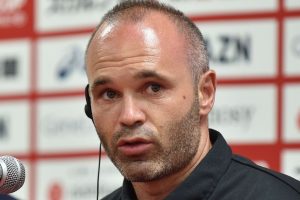 Barcelona icon Andres Iniesta has admitted that it will hurt to see Lionel Messi playing for PSG this season following his free transfer out of Spain this summer.

The World Cup winning former Spain international played alongside the Argentina skipper on 488 separate occasions during their time together in La Liga – combining for more than 50 goals.

With the 37-year-old watching the deal proceed while featuring for Vissel Kobe in Japan's J1 League, he has detailed his sadness at Messi's Barcelona departure.

With Messi stating that he is still processing the move during his official PSG press conference, Iniesta has been defiant about the new status of his former club without their greatest ever player.

“I don’t know what happened internally, nor how things unfolded, but the club will need to recover from this transfer," Iniesta told AFP this week.

“It will hurt to see him in another team’s shirt. Leo personifies Barcelona. He was everything, he’s a player who transcends the team. I’ve never seen a player like him and I don’t think I ever will.

“[Barcelona] will continue to be one of the best teams, one of those that has to be on the summit.”

Will Lionel Messi fire PSG to Champions League glory this season? Give us your thoughts in the comments section

Iniesta will be one of many Barcelona legends that are devastated to see Messi part ways with his boyhood club after 17 first-team seasons in which he scored 672 goals and won 21 major honours.

Messi told fans on Wednesday when asked about the idea of playing alongside Kylian Mbappe and Neymar in France: "It's crazy and I'm happy about that.

"Sharing day to day life with them. Really there are some amazing transfers so the team is incredible. I want to train and compete. I'm going to be playing with the best players. It's very nice.

"I was on holiday and it's very new. I spoke yesterday with technical staff so maybe I need a pre season myself. "I'm going to train and work. I really want to.

"Everything that happened to me has been very strange, hard and quick and emotional.

"I can't forget what I lived and experienced in Barcelona but I really feel impatient and happy. We are processing all of this, little by little."