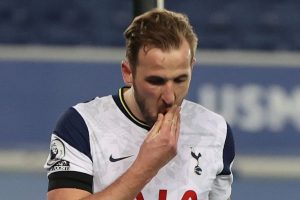 Jose Mourinho hopes to learn the full extent of Harry Kane’s ankle injury on Sunday as the Tottenham ace undergoes further tests in a bid to determine whether or not he will be fit for next Sunday’s Carabao Cup final.

Kane suffered the blow late on in Spurs’ 2-2 draw with Everton on Friday, in which he scored both of the visitors’ goals.

The England captain left Goodson Park with light strapping on his swollen ankle.

But, crucially, initial assessments of the injury ruled out the need for further tests at a hospital on Merseyside and he flew back to London with his team-mates.

Speaking to Spurs TV, Mourinho said: “Even Harry doesn’t know much. He just had that negative feeling that brought him out of the game.

“I believe that probably Sunday will be a day to have a different view and to try to anticipate what can happen next week.”

Spurs medics were waiting for the swelling on Kane’s right ankle to subside enough for him to get a scan that would give them a clearer picture of what they were dealing with.

It is unlikely he will be risked in Spurs’ Premier League game against Southampton on Wednesday whatever the result at this stage.

But immediately after the match with Everton, Mourinho was cautiously optimistic that his main man would be available for the clash with Manchester City at Wembley a week today.

Kane went down after Richarlison unintentionally rolled into him as the Brazilian fell to the ground.

The Spurs striker had given his side the lead early in the game and bagged a late equaliser after a double from ex-Tottenham player Gylfi Sigurdsson, including a penalty, had put Everton ahead.

Kane’s goals took him to 33 in 51 appearances for club and country this season, with 21 of his 31 goals for Spurs coming in 30 Premier League games.

Team-mate Eric Dier said: “When Harry gets in that position, from behind I have no doubt he is going to do the job.

“He is as reliable as they come, incredible consistency over many years.

“He keeps going and it’s a credit to him and the work he puts in and his mentality.”