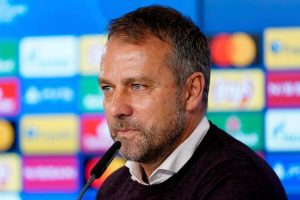 Hansi Flick has asked Bayern Munich to terminate his contract as head coach at the end of the season.

After several disagreements with sporting director Hasan Salihamidzic, Flick’s relationship with Bayern’s hierarchy has been tense in recent weeks. The 56-year-old’s contract runs until the summer of 2023.

Joachim Low will leave his position as manager of the Germany national team at the end of this summer’s European Championship and Flick has been one of the names linked with becoming his successor.

“I told the team today that I informed the club during the week after the game in Paris that I would like to get out of my contract at the end of the season,” Flick said after Bayern’s 3-2 win over Wolfsburg on Saturday.

He added that becoming Germany’s new manager in the summer remains “an option”.

After Bayern’s exit at the quarter-final stage of this season’s Champions League earlier this week at the hands of Paris Saint-Germain, former Bayern midfielder and Germany international Lothar Matthaus told Sky in Germany that Flick is top of the DFB’s shortlist of candidates of who they want to replace Low later this year.

Since Niko Kovac departed the Allianz Arena in November 2019, Flick has excelled in his role as Bayern boss, winning six major trophies in an 18-month period, including last season’s Champions League.