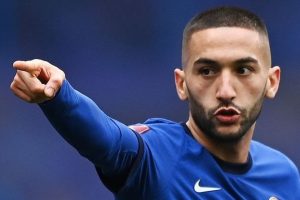 Hakim Ziyech’s stance on a potential switch to AC Milan could have big ramifications for Chelsea’s pursuit of Erling Haaland. Ziyech could be offloaded before the transfer window shuts after just one season in the Premier League, having dropped down the pecking order under Thomas Tuchel.

The 28-year-old winger joined Chelsea in a £36million deal from Ajax last summer, but has struggled to replicate the impressive form he showed with the Dutch club.

In 36 appearances in all competitions he netted just six goals, and appears to be behind Christian Pulisic, Kai Havertz, Mason Mount and Timo Werner in his manager’s thinking.

Ziyech has been linked with interest from Milan throughout the summer, with the Serie A side having already signed centre-half Fikayo Tomori from Chelsea.

The latest reports from Italy claim the Italians have seen a bid to take Ziyech on loan rejected by Chelsea.

But the Morrocan winger could still switch to the San Siro if Milan can finance a permanent deal, according to Calciomercato.

The report says Chelsea will not sell Ziyech on the cheap, with owner Roman Abramovich likely to want to recoup as much of last summer’s transfer fee as possible.

And Ziyech’s stance on joining Milan could have a serious bearing on Chelsea’s chase for their top target Haaland.

As things stand, the Premier League club do not look likely to land Haaland this summer, with Borussia Dortmund wanting at least £150m for their star striker.

The 21-year-old will be much more affordable in a year’s time when his £68m release clause becomes active.

But if they wait, Chelsea run the risk of being beaten to the striker’s signature with the likes of Manchester United, Manchester City and Real Madrid likely to join the race.

However, if Ziyech can be sold this summer, Tuchel’s transfer kitty could be boosted by around £30m.

With Chelsea also looking to sell Tammy Abraham for around £40m, the club could rake in half of Haaland’s price tag just from offloading two out-of-favour players.

And after spending more than £200m last summer, Abramovich has shown he has still deep pockets for the right deal.

It would then remain to be seen would be whether Dortmund could be tempted to part with their prized asset – and whether Haaland would see Stamford Bridge as the right destination.