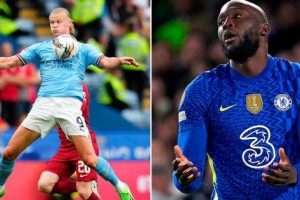 Fans have joked that Erling Haaland has already "turned into Romelu Lukaku" after he missed three chances and had minimal touches in the Community Shield.

The Norwegian striker was making his competitive debut for Manchester City in the season's curtain raiser at the King Power Stadium following his move from Borussia Dortmund. However, it proved to be a difficult afternoon for Haaland as he struggled to impose himself on the match against FA Cup winners Liverpool.

Fans were quick to pick up on the 22-year-old's performance, with Haaland having just eight touches of the ball during the opening 45 minutes.

One rival supporter slammed his performance on Twitter as they wrote: "Haaland turning into Lukaku right before our eyes, lmao."

Another joked: "I reckon City should bring Haaland on. They’ve just paid a lot of money for him and they could do with a goal." Meanwhile, a third added: "I don’t think Haaland has had 5 touches of the ball in this match."

One more supporter was also critical, as they tweeted: "Haaland been on the field for decades… Can't even get a shot on target.."

Haaland failed to get on the scoresheet on Saturday, having seen an effort saved by Adrian before he failed to connect cleanly with a cross when right in front of goal.

How many goals will Erling Haaland score this season? Let us know in the comments section below.

His worst miss of the day came in stoppage time, though, as he pounced on a rebound with the goal gaping, only to sky his shot over the goal via the crossbar.

He arrived at City earlier this summer after the Premier League champions triggered the £51million release clause in his Dortmund contract.

The former Red Bull Salzburg man arrived in England after scoring a staggering 85 goals in 88 appearances during his time in Germany, including 29 goals last season.

However, his woes on Saturday have seen him compared to Lukaku, who endured a torrid campaign with Chelsea last season after returning to England.

The Blues broke their transfer record to re-sign Lukaku, but he was only able to score eight league goals and has now returned to Inter Milan on a season-long loan.