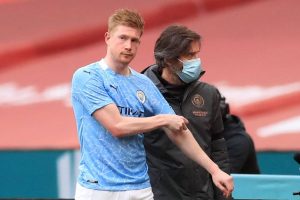 City's quadruple hopes were dashed as they lost in the FA Cup semi-final to Chelsea on Saturday.

Hakim Ziyech's second-half strike was the difference as Guardiola's side put in a below-par performance at Wembley.

Their woes were compounded though when De Bruyne was forced off after 48 minutes.

“It doesn’t look good. He has pain," Guardiola revealed. "We will see. Tomorrow he will have a test."

De Bruyne, who recently penned a new deal, has been integral for City throughout this season.

They can still land a memorable treble should they win the league, the Carabao Cup and the Champions League.

Guardiola's side will return to Wembley in a weeks time for the Carabao Cup final against Tottenham, but may be without their Belgian star.

Speaking after their defeat to Chelsea, a game in which City made eight changes to the starting XI, the City boss admitted they didn't create enough.

He said: "We played a good last 15 minutes. We had struggled to find our place in the pockets but congratulations to Chelsea in a tight game.

"We arrived sometimes in that position but after that we didn't create.

"We conceded the goal but after we reacted well, especially after Phil Foden and Ilkay Gundogan came on.

"The team that defends with eight players in the final third it is not easy. This type of game the margin is so tight. In general we controlled well.

"We didn't create many clear-cut chances but we arrived more than them."