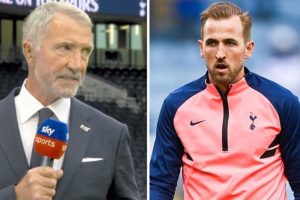 Graeme Souness has hinted he knows more about Harry Kane’s situation at Tottenham amid continued links to Manchester City. Kane was absent from the Spurs squad as they beat City 1-0 at the Tottenham Hotspur Stadium on Sunday. The England captain only returned to training on Friday after an extended break following Euro 2020.

Kane still wants to leave and City are still keen on signing the player.

Tottenham and their new head coach Nuno Espirito Santo have reiterated that the 28-year-old is not for sale and is an important part of their squad.

Following the match on Sunday, Souness and fellow Sky Sports pundit Micah Richards got into a heated debate about Kane and Manchester United star Paul Pogba.

Richards questioned why Pogba gets “abuse” for reports linking him with a move away from Old Trafford but Kane is not criticised to the same extent for his approach.

“Kane’s not turned up for training and we’re calling him a saint,” Richards said.

But Souness hinted there was another reason why Kane did not return to the Spurs training ground, which has not become public knowledge yet.

He quickly attempted to change the subject, replying: “My information about Kane is not that he didn’t turn up for training. There’s another story behind that.

“Can we move on and talk about Chelsea or Liverpool please?”

Before the match, Souness said City’s interest in Kane proves Pep Guardiola feels he cannot get away with not having a top striker.

Guardiola has often played with a false No 9 and did so again on Sunday, with Ferran Torres occupying the position from the start.

“Sergio Aguero, I think played just a dozen games last year, but you’ve got to have a 30-goal-a-season man if you are one of the big teams.

“Can he get away with it again? The fact he’s trying to buy Kane tells you he sees it that way as well.”