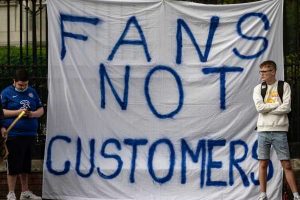 The government must create a community fund to enable fans to buy and take back control of their football clubs in the wake of the failed European Super League, a new report has claimed.

The report from Power to Change – which supports communities to take ownership of the buildings, places and businesses that matter to them – calls for authorities to put a Community Club Ownership Trust at the heart of reforms to the game.

The government has put fan ownership on the table as part of their fan-led review into football’s governance following the launch and subsequent collapse of the breakaway competition last week.

Supporters, including those at Arsenal and Manchester United, have protested the proposal by their club owners in the days since it fell to pieces with a move towards a more German model of ownership gaining support in political circles.

The trust would be “funded through broadcast revenue or a levy on the gambling industry” with the £400m figure able to support it for a decade.

The report calls for changes to football through the fan-led review process to ensure better financial management throughout the game, ending the “casino culture that incentivises short-term gambling over long-term sustainability.”

It hopes the creation of such a fund would give fans a chance to purchase clubs when they come up for sale as well as giving a viable alternative to liquidation in many cases.

Vidhya Alakeson, CEO of Power to Change, said: “Coming from Wimbledon, where our beloved football club was ripped from the town and transferred to Milton Keynes, I understand very personally how the business of football has come to dominate the game in recent decades.

“Last week’s announcement of a proposed European Super League was a dramatic illustration of organisers failing to recognise that football clubs are much more than just businesses – they are communities embedded in their local area.

“With such a focus on the business and income generation around football, it is mind-boggling that so many successful football clubs find themselves on a perilous financial footing – run for glory rather than long-term sustainability.

“A new Community Club Ownership Trust has the potential to create both a more financially sustainable approach to football that protects these vital local institutions into the future, and importantly also reconnects them to local fans and communities – without whom there can be no beautiful game.”