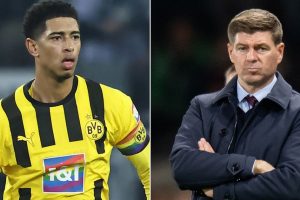 Steven Gerrard has urged Liverpool not to become obsessed with one midfielder amid the club's interest in Jude Bellingham.

The Reds are in dire need of a midfield revamp to keep up with Premier League rivals Manchester City, Arsenal, and Chelsea, who have all invested heavily in their squads, especially the latter whose spending has rattled Gerrard. And Bellingham is the name that comes to Gerrard's mind when he looks at what the Reds are lacking in the middle of the park.

After witnessing Bellingham's heroic performances for England at the World Cup, Gerrard thinks the 19-year-old midfield engine can use his power and speed to drive into the boxes of opponents and score goals for Liverpool, which is what they're missing at the moment. In the other areas of the Reds' midfield, Jordan Henderson covers Trent Alexander-Arnold on the right-hand flank when he bombs forward, Fabinho holds the fort, whereas Thiago is an all-rounder in Gerrard's eyes, leaving space for Bellingham to slot into and weave his magic.

Gerrard explained when detailing his admiration for Bellingham: "Right now, I think the obvious one is Bellingham off the back of the World Cup and what he’s doing out in Dortmund anyway. I’m a huge fan of him, I think the way he comes across, the way he speaks about the game, his performances that I’ve seen every time he impresses me.

"He’s the obvious one at the moment because Henderson is adapting his game when he covers Trent a little bit on that right-hand side, Thiago is more of a footballer whilst Fabinho stays, Liverpool lack this running number eight who can arrive in the box, can get you a goal, who’s got that power, who’s got that burst, who can step aside and really leave someone for dead."

Is Bellingham the right player to boost Liverpool's midfield department? Let us know in the comments section below

However, despite his reverence for Bellingham, Gerrard doesn't want his beloved club to put all their eggs in one basket as there's many other midfielders in the world who would love to play for Liverpool. He added: "Bellingham ticks all them boxes so he’s the obvious one, but I think it’s important that we don’t become obsessed with one midfielder. It’s Liverpool Football Club, everyone around the world knows that Liverpool will be looking, they’re scouting midfielders and there’s a lot of very good midfielders around the world."

Gerrard's plea comes after it was reported that the Reds are plotting a swoop for Bellingham's England midfield counterpart Mason Mount. Mount's yet to pen a new deal at Chelsea, and the Kop giants are waiting to pounce if Mount decides against staying at Stamford Bridge.

But they're favourites to sign Bellingham at the moment although Real Madrid are also hot on his heels. Dortmund have slapped a £100million transfer fee on the youngster, and Madrid are said to be unwilling to break the bank for him.

If Bellingham does make the switch to Anfield, Liverpool supporters want him to wear Gerrard's No8 shirt after the Dortmund ace revealed the Reds veteran is his idol before the World Cup. Speaking about his inspiration, Bellingham said: "Steven Gerrard was probably my biggest one, the character he has besides the football is, you know, world-class. Then you add on his ability, it's a joke really."