‘They have to take responsibility at some point’: Steven Gerrard frustrated with his Rangers players’ displays in draw against Kilmarnock

Steven Gerrard expressed deepening frustration on Wednesday night after his Rangers players failed to deliver the reaction he had demanded to Sunday’s Hampden flop.

The Ibrox outfit were held to a 1-1 home draw by Kilmarnock after Greg Stewart cancelled out an Alfredo Morelos opener inside the first 15 minutes.

Gerrard admitted the performance had again fallen well below his expectations – on the back of their Betfred Cup semi-final defeat to Aberdeen – and insisted his squad had to take greater responsibility to improve domestic results. 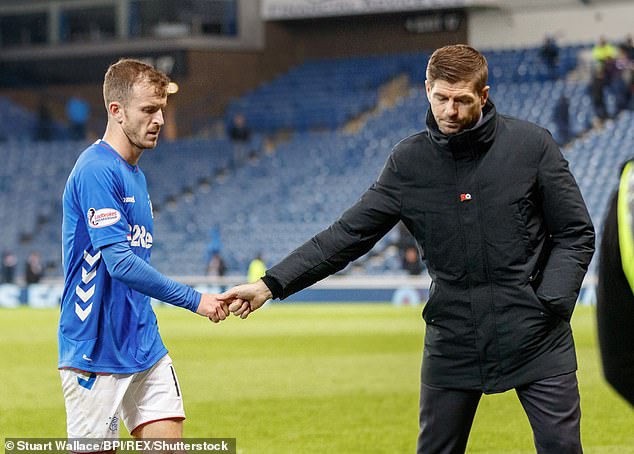 ‘I can sit here and protect them all night and take the blame,’ said Gerrard. ‘If that’s what they want then I will.

‘But they are Rangers players. They are the ones who have to go out and deliver and tonight they haven’t.

‘We will all take the blame together but they have to take responsibility at some point. It is a concern that it has happened a few times now.

‘I know the players can play better than this. The performance wasn’t good enough. Two or three really put it in and maxed out for us but the rest weren’t at it.

‘I thought it was a pretty similar performance to Sunday. Not good enough.

‘It was a six or seven out of ten and it wasn’t enough to beat a well-drilled Kilmarnock team. 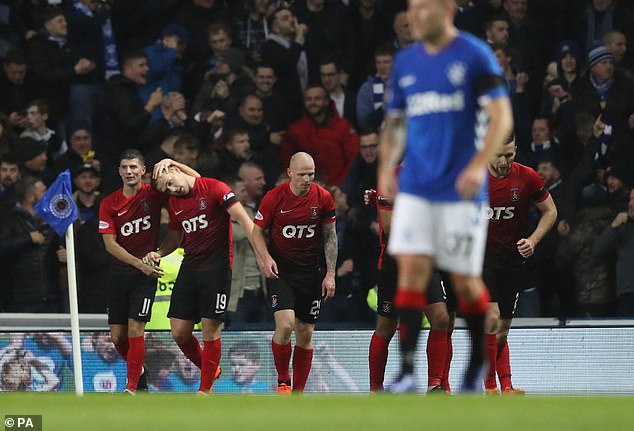 ‘We knew the onus would be on us to provide the quality. We got the first goal which should have given us a big lift but it never.

‘We continued to play slowly. It was a frustrating result and a frustrating performance.’ Gerrard made four changes from the weekend, including giving Wes Foderingham a surprise start ahead of Allan McGregor. The English goalkeeper made a vital stop during injury-time to prevent Stewart netting a winner.

‘Wes stopped us from actually dropping three points with a terrific save at the end,’ added Gerrard.

‘He has been outstanding in training the last two or three weeks.

‘Allan has had a small problem on the right side of his back, probably not enough to keep him out but a flag, if you like, to me about his age and the amount of games we are going to play over the course of the season.

‘I actually thought our reaction from Sunday would allow me to change the keeper.

‘But there are no fingers to be pointed at Wes. He could have done nothing at the first goal where we didn’t defend well enough. 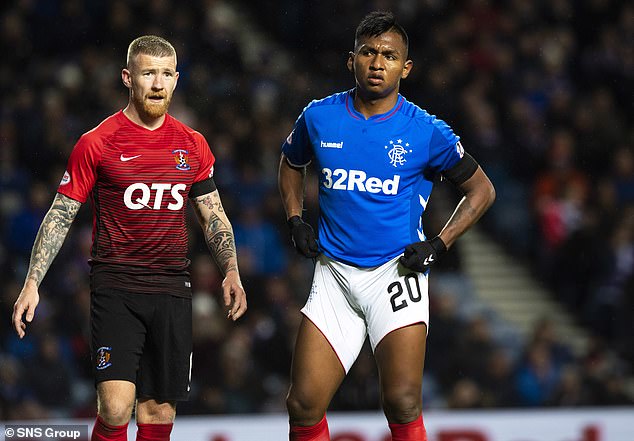 ‘We were soft, missed the header and let a left-footer come back on his strong foot. There are other people to point fingers at for that goal. Because of Wes, we didn’t lose the game at the very end.’

Killie counterpart Steve Clarke admitted satisfaction at becoming the first side to take league points from Ibrox this term.

‘I thought it was a good game between two good teams,’ said Clarke, whose side remain third – three points above Rangers.

‘Both goals could go down as a little bit fortunate. They scored with their first shot which was a deflection, and we scored with our first shot that was a lucky ricochet in the box and he stuck it in the top corner.

‘I believe we’re the first team in the league to come here and stop Rangers getting all three points, so we can be pleased with that.

‘But we’re also a little bit disappointed because we also had opportunities, especially in the second half when the game opened up a little bit.

‘With a little bit more care and attention, we might have had all three points.’