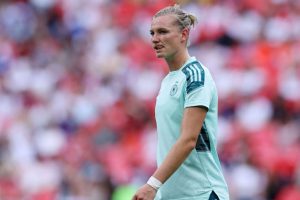 Germany captain Alex Popp was pulled from her country’s starting lineup for the Women’s European Championship final after suffering “a muscular problem” in the warm-up, the German Football Association confirmed on Sunday.

Popp, 31, had been named in the starting lineup in an unchanged side from Martina Voss-Tecklenburg but will now be replaced by Lea Schuller.

Popp was tied with England’s Beth Mead for the tournament’s top scorer award before kick-off after scoring six goals in five games.

She became the first player in Euro history to score in five consecutive games and her double against France in the semifinal ensured Germany progressed to the final at Wembley.

“[Alex Popp] has suffered muscular problems in the warm-up. Lea Schüller replaces her in the starting XI,” the statement said.

The DFB did not confirm whether Popp would not feature at all throughout the game.

This is Popp’s first Euro tournament after missing the previous two due to serious injuries. She only recovered from a third serious injury which kept her out for 11 months in March.

England also named an unchanged starting XI, making them the first team in either the men’s or women’s Euros to not change their team throughout the entire tournament.