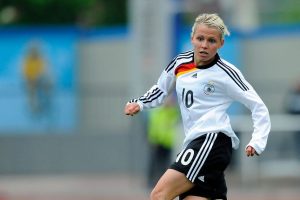 Five German under-20 internationals faced a fierce backlash after they posed for the photoshoot on the eve of the tournament, with the magazine staying on shop shelves throughout the event. Then Bayern Munich trio Annika Doppler, Ivan Rudelic and Julia Simic were joined by Selina Wagner and Kristina Gessat of Wolfsburg and Gutersloh, respectively.

Fans criticised the decision to keep the issue on sale during the tournament, with others arguing that the shoot was using nudity to attract an audience for matches.

However, Gessat hit back at the critics, telling The Local: "With these photos, we want to disprove the cliche that all female footballers are butch."

As for the argument that the shoot was being used to sell tickets, one Reddit user pointed out at the time that thousands of tickets had already been sold prior to the magazine's publication.

"Wait, didn't Germany ALREADY sell 70,000 tickets to their opening match WITHOUT this article coming out?" they explained online.

Who will win the final of the Women's Euros on Sunday? Let us know in the comments section below.

"So people that are saying this is essentially naked advertising for the Women's World Cup are wrong because at least in Germany, there seems to be a healthy interest in the game already."

Neither the German FA nor the players' clubs were approached prior to the photoshoot, with Playboy explaining that the decision to appear had been down to the players.

Nina van Splunter of German Playboy was quoted by the Daily Mail at the time stating: "For us, this makes a lot of sense. Everyone knows how popular football is in Germany and, just like their male counterparts, the female team are very successful.

“The girls we have used are not yet first-team players with Germany, but they have all represented their country at various levels. We have only just published, so we're waiting to hear comments. There was no agreement – we didn't ask the DFB, we went direct to the ladies."

The 2011 Women's World Cup was hosted by Germany, with the national team going into the tournament as defending champions. However, they were eliminated in the quarter-finals by eventual winners Japan.

Germany will appear in the final of this year's Women's Euros at Wembley Stadium on Sunday as they take on England in a replay of the 2009 final, which Germany won 6-2 in Helsinki.