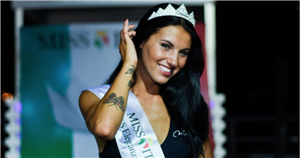 Iconic footy legend Paul Gascoigne is heading into a jungle in the middle of Honduras for an Italian reality show.

'Isola de Famosi', which has similarities to 'I'm a Celebrity… Get Me Out Of Here…', will kick off on March 15 and will run all the way until May.

The overall winner of the competition will receive €100,000, which Gascoigne has already promised to a charity founded in the honour of his nephew.

Gazza has already chosen a blanket, a pillow and a cup as his three 'luxury items' to take into the show.

But who will the England legend be sharing a camp with during his time overseas?

One of Gascoigne's camp-mates will be former showgirl and dancer – Angela Melillo.

Melillo has already won one reality show after claiming victory in the first ever series of 'La Talpa' in 2004, where the aim of the game is to find and unmask the mole, who hides among the competitors.

Daniela Martani is one of the more controversial stars of the show and has hit the headlines for all the wrong reasons of late.

The former Big Brother contestant has spent the last year or so spreading fear about the Coronavirus pandemic.

Martani has continuously denied that the virus even exists and has criticised the Italian government for their conspiracy.

“In intensive care there is no one anymore, so they have to scare us with the number of positives," she said about the pandemic. 61-year-old actor Roberto Cuifoli is one of the funnier competitors on the show.

The star of the tv screen has been in the public eye since 1986 after appearing in a comedy quartet with three pals.

Like Angela Melillo, he has also appeared on reality show 'La Talpa'

Gascoigne was initially meant to be joined by former Miss Italy – Carolina Stramare.

However, the 22-year-old beauty has pulled out of the show.

Stramare, who was crowned Miss Italy back in 2019, revealed the news on Instagram this week.

“As you well know, my participation on the island was made official in the last few hours. In the last few hours, however, some family health problems have arisen that I prefer to protect and keep under control and I believe that the best choice is not to leave and stay at home," she wrote.