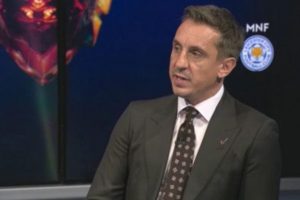 Gary Neville has told Manchester United how much to spend to land West Ham star Declan Rice. The Red Devils legend said Rice could play in almost any midfield after the England star impressed as the Hammers thrashed Leicester City 4-1 to go top of the Premier League.

Rice was one of several standout performers for David Moyes’ side as they swept aside the Foxes with goals from Pablo Fornals, Said Benrahma and two from Michail Antonio.

The 22-year-old has been linked with interest from United for some time, with Ole Gunnar Solskjaer believed to be eyeing the addition of a deep-lying midfielder before the transfer window shuts next week.

Reports have claimed director of football John Murtough could include Jesse Lingard in a part-exchange bid to bring Rice to Old Trafford, with the Hammers having slapped a high price tag on the midfielder in a determined bid to keep hold of him.

But Neville has told his former club how much they should splash out to land him, as he hailed Rice and his team-mate Tomas Soucek.

Speaking on Sky Sports’ Monday Night Football, Neville said of West Ham: “The two midfield players, two centre-backs and Antonio up front, keep them fit – particularly the two central midfield players and Antonio – if those three stay fit then they’re going to have a really good season because they’ll win a lot of football matches.

“The foundation they get from those two central midfield players is brilliant, it really is.”

Jamie Carragher then teased his fellow pundit, saying: “Do you like Declan Rice now?”, to which Neville replied: “I’ve always liked him. I’ve got no problem with Declan Rice at all. The question is, 80 or 100 million pounds, would you spend that level of money on him?”

Asked what he would spend to land Rice, Neville said: “50, 60 million.

“£100m I’d say probably not, but as a midfield player with Soucek, it’s an outstanding pair that.”

Neville went on to say that Rice and Soucek would play in any team’s engine room, other than that of Manchester City.

“You’d want them in your midfield,” said the former Red Devils defender. “Apart from Manchester City, they could go and play in any midfield.”

Rice is under contract at West Ham until the summer of 2024 but has reportedly turned down the offer of a new deal on three separate occasions, suggesting he could soon be angling for a new challenge.

And United’s transfer chief Murtough could look to play on West Ham’s interest in Lingard in an attempt to pull off a swap deal that could benefit all parties, according to United We Stand editor Andy Mitten.

“I know that Manchester United like Declan Rice,” Mitten told the Talk of the Red Devils Podcast.

“A week ago, I was told don’t bet against someone else coming in at the club. They clearly want someone else to come in but the finances might restrict that.”