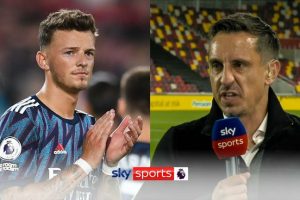 Arsenal on the back foot after losing opening game of the new Premier League season; Gunners next two league games are against Chelsea and Manchester City; captain Pierre-Emerick Aubameyang missing due to illness

Gary Neville has described Arsenal as being “messed around” in their chastening 2-0 defeat at Brentford on the first day of the new Premier League season.

Despite dominating possession against the Premier League newcomers, the Gunners crumbled, with their defensive vulnerabilities exposed either side of half-time and the visitors blunt in front of goal after captain Pierre-Emerick Aubameyang and Alex Lacazette called in sick.

“They’ve been messed around,” Neville told Sky Sports. “A game of football is really difficult if your centre-backs are getting messed around by the opposition forwards and that’s happened from minute one tonight.

“There’s nothing worse than thinking your team are a little bit soft. Brentford have looked at them and thought, ‘yeah, we’ll have you’, and that’s the worst feeling.

“Arsenal fans will go away from here tonight thinking ‘we’ve been bullied’.”

But while Neville was concerned at the manner of Arsenal’s defeat on Friday night, the Sky Sports pundit also voiced his fears about the Gunners’ long-term strategy.

“I don’t know what the plan is at Arsenal,” he said. “The recruitment has been really poor. They are just poor at it compared to other clubs.

After Sergi Canos had fired Brentford ahead, Arsenal then conceded a soft second goal when their defence crumbled from a long throw into the box and Christian Norgaard headed into an empty net.

“If you’re taking the shirts off Arsenal and you were asking me ‘who will concede a goal like that?’, the first team which would come to mind would be Arsenal,” admitted Neville’s fellow Sky Sports pundit Jamie Carragher.

During his co-commentary of the game, Carragher had been even more scathing.

Neville also gave short shrift to suggestions that Arsenal goalkeeper Bernd Leno should have been awarded a free-kick after being manhandled for Brentford’s second goal.

“He is being backed into but a goalkeeper has to get him out of the way. He got himself blocked. You could argue he is being fouled but a top goalkeeper is not getting fouled there.”

But it was not in goal or up front where Arsenal’s struggles were most acute.

“He is not going to get taller so he has got to be cleverer with his body shape and movement to deal with big strikers,” Carragher reflected. “You want to see him do well but I must say that he was linked with Liverpool for the last 12 to 18 months, that my fear was that l didn’t want him to come to Liverpool because he is not tall enough and not good enough in the air.

“When he played in a back three at Brighton, the two alongside him were giants. People are going to be watching tonight and think ‘just play long balls on Ben White’s head and you will get joy’.”

Arsenal’s next match is against Chelsea a week on Sunday when White is likely to be pitted against Romelu Lukaku.