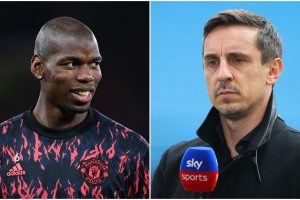 ten Hag: No 'risk' to come to Manchester United

Manchester United icon Gary Neville has hit back at Paul Pogba for claiming that the club made a mistake in letting him leave, and believes that the Frenchman has not performed well enough in his six years at the club since returning from Juventus. Pogba released ‘The Pogmentary’, an Amazon Prime documentary in which he discusses his exit from Old Trafford this summer and revealed that his idea was to show the club that they made an error in waiting to offer him a contract.

The documentary showed Pogba talking with his agent Mino Raiola, who passed away in April, about the club’s attempts to retain the 29-year-old as his representative told Pogba that the club did want to keep him. “They’re bluffing,” Pogba replied. “How can you tell a player you absolutely want him and offer him nothing? Never seen that.”

Pogba has received criticism, including from former United defender Neville, after claiming United offered him “nothing”, despite reports claiming that he was proposed a deal of £300,000-a-week to stay at Old Trafford.

“I’m not bothered about Pogba’s comments to be honest with you,” Neville said on TikTok. “I think that once a player has left, he can say whatever he wants. Fine, no problem. But I don’t think he has performed well over the last six years. I don’t think the club have performed well with him either or handled him well.

“It’s been a partnership that, to be fair, has failed on both sides so that is what you’d have to say on that one. There is no winner when a player leaves after six years with the money that has been spent and very little has been won.

“The player leaves dissatisfied and the club are dissatisfied with it as well. It leaves a bad taste in the mouth because it’s the second time it’s happened. You wish him all the best in the future at Juventus.”

After leaving United for the second time, Pogba has reportedly had offers from Real Madrid, Paris Saint-Germain and Juventus but is leaning closer to moving to Italy on a free transfer.

He won four Serie A titles with Juventus after joining them on a free transfer from United in 2012, which prompted Jose Mourinho to spend £89million to bring him back to Manchester.

Despite winning two trophies under the Portuguese boss, he did not always get along with his manager and explained how the relationship between the two broke down.

“It started when I got injured,” Pogba said. “I said I was going to Miami to do rehabilitation. A paparazzi took a photo of Zulay [Pogba’s wife] and me. Jose sent the picture to Mino [Raiola]. I didn’t like that at all. He said he’s on holiday when we are working like [EXPLETIVE]. I told Mourinho ‘Are you serious? I’m injured. I train three times a day here’.”