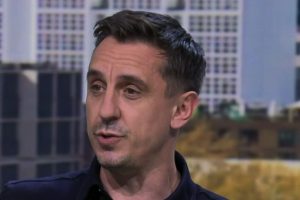 Gary Neville has heaped praise on Gareth Southgate for making “unpopular decisions” with his team selection against Croatia.

Southgate incurred the wrath of England supporters after leaving fans’ favourite Jack Grealish on the bench and starting with a three of Mason Mount, Phil Foden, Raheem Sterling behind Harry Kane.

He also puzzled supporters with his decision to start right-back Kieran Trippier on the left despite having Luke Shaw and Ben Chilwell in the squad.

His selection ultimately paid off as Sterling scored his first goal at a major tournament to give England a deserved 1-0 win and with it top spot in Group D. Speaking on ITV, Neville began by expressing his shock at the inclusion of Trippier at left-back.

“I was shocked by the inclusion of Trippier at left-back, like most people who saw the team”, he said.

“I have to say not in a doubting way because I don't doubt the manager – I think we've got an outstanding international manager who has unbelievable experience.

“I don't think there will be one person out of the 65 million English population that would have picked that team today.

Did Gareth Southgate get his selection spot on against Croatia? Let us know in the comments section.

“There are a lot of things that would have historically gone against England today – 2 o'clock kick-off, hot, 30 degrees, playing against a team that passed us off the park in the last tournament and beat us, experienced team, not having their best defender going into the game and not playing his best team going into the game.

“I thought he managed that game unbelievable today.”

Neville also addressed the situation involving Grealish, who didn’t make it off the bench despite impressing in both warm-up games against Romania and Austria.

“I think that we talk about the best player might be Kalvin Phillips or Raheem Sterling but our biggest asset is our manager.

“I think the clamour in past years would have been to go for Grealish. He's not even brought him off the bench – and he made substitutions.

“He's willing to make the unpopular decisions, decisions that ultimately we, at times, don't think he should make.

Southgate will have more difficult decisions to make on Friday when England take on Scotland in their second game of Euro 2020.

READ MORE: Three things Gareth Southgate got right in Euro 2020 opener – but he made one mistake

READ MORE: England WAG shares what VIP guests were treated to at Wembley before Croatia win