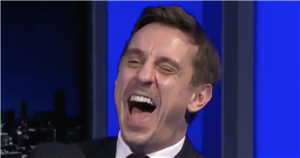 Manchester United legend Neville, 47, was watching the bout on Sky Sports when Liverpool pal Carragher popped up on the TV. The former Anfield stalwart appeared in shot with Smith, prompting Neville to make a brilliant quip at his colleague's expense.

Having taken a picture of his TV screen with the pair both in view, Neville tweeted: "Stay clear of him Liam if you want to win titles."

Carragher never managed to lift the Premier League in his 17 years on Merseyside, twice finishing as runner-up. Neville, on the other hand, won eight top-flight titles under the guidance of Sir Alex Ferguson.

Needless to say, fans loved Neville's cheeky dig and took to the comments section to share their delight. One wrote: "Quality." As a different supporter said: "This is top tier."

Do you think United will win the title this season? Let us know in the comments section below.

Someone else commented: "So much time for it." A fourth added: "That is cold." While another fan joked: "Savage."

Despite Carragher's inability to land a title with Liverpool, his presence didn't distract Smith who subsequently floored Eubank Jr in round four to claim an impressive victory.

That prompted a flurry of Liverpool fans to return to Neville's post and comment: "Aged well Gazza."

Smith and Eubank Jr. hugged in the ring after the fight, with the former opening the door to a potential rematch. "I said all week I'm a good finisher and I knew if I got him hurt that I would finish him," he told BBC Radio 5 Live.

"Name me a Chris Eubank fight that has been respectful – not many. Something I said may have come across wrong and I apologise for anyone offended by that. I respect everybody and it was just tongue in cheek with Chris.

"There's not many fighters who can milk a crowd like I can. That was up there with the best nights in my career. I'll do the rematch on my terms."

Meanwhile, Manchester United and Liverpool will renew their rivalries in a couple of months' time on March 4.