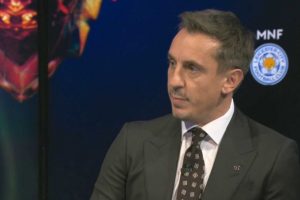 It didn't take long for Gary Neville and Jamie Carragher to renew hostilities on the first Monday Night Football of the season.

With West Ham facing Leicester in the Premier League, the duo were back in the Sky Sports studio dissecting the weekend's action.

Manchester United's 1-1 draw at Southampton was first up in the analysis, and the pair did not agree on when evaluating Ole Gunnar Solskjaer's side.

Jadon Sancho and Raphael Varane have both signed for the Red Devils, though Neville believes more is needed.

“I’m struggling to understand why United aren’t going that extra step in this transfer window," he said. "Sancho was £70m but that was last year’s money. "In regards to United, they’ve always gone after the best English or British player in the Premier League, historically.

"Why is Martial, James, Lingard, you’re talking about offloading wages there and potentially getting a transfer fee in, why are they not going in for Harry Kane this week? I think if Kane went to United, they could get up to 90-95 points.

"They still need to replace Cavani and Martial next summer. Martial isn’t going to do it, Cavani only has one-year left.

"They’re going to have to buy a centre-forward at some point, why not get the man now and give Ole the impetus he needs to get to that points total. I don’t think he can with just Sancho and Varane.”

Though Carragher believes United should be battling at the top after splashing the cash this summer.

The Liverpool legend hit back: "You’re talking about Chelsea going after [Romelu] Lukaku, he scored on his debut yesterday, and all of a sudden it’s ‘Chelsea are going to win the league’.

"United finished above them last season, they bought Varane and Sancho. I don’t get this feeling of ‘Manchester United can’t compete’.

"If Pep Guardiola, Jurgen Klopp or even Thomas Tuchel had United’s squad, I feel they could win the league, I really believe that.

Neville fought back by saying: "They’ve tried the world-class manager route and it hasn’t worked. I’m not saying it won’t work if they tried another one…"

Though Carragher was adamant in his viewpoint, continuing: “My point is, with the squad that is there, you never want to say that Manchester United could win the league but that squad there is £50m plus in almost every position."

With Carra asking his fellow pundit: “What’s lacking at Manchester United to really go for the league? Is it the team, is it the squad or is it the manager?”

And Neville still believes Solskjaer deserves time, answering: “I think with the manager, you can argue that he has to prove himself quickly.

"They’re going for someone who is taking it back to their roots, he needs to be given a chance to do it."

Carragher pushed on: “What is success this season for Manchester United?”

Though Neville still had excuses: “They have to challenge for the title but I genuinely think that if City go and get Kane, what Chelsea have done with Lukaku, with Van Dijk returning for Liverpool, they need that something different.

"You took the mickey out of me a couple of weeks ago when I said that Manchester United can improve this season and go from second to fourth because the other teams have gone up… Why are you laughing at me?”

That saw host Dave Jones take the show to a break… It's good to have Carragher and Neville back.