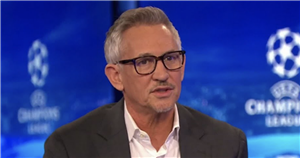 Gary Lineker was forced to miss out on BT Sport’s coverage of Manchester City’s Champions League semi-final first leg against PSG following a postive Covid test for a staff member.

Jake Humphrey revealed at the start of the show that he had stepped in following the postive test scare, with the team from yesterday replaced to avoid potential spread.

Lineker then wrote on Twitter: “Massively disappointed not to be on @btsport tonight for such a great game. A late shout after a positive Covid test to an important member of our team.

“Obeyed our strict social distancing guidelines, but it was decided to be ultra cautious & get tested before returning to work.”

Humphrey said: “We’re very much looking forward to this this evening, however there is no Gary Lineker tonight because unfortunately one of the team from last night has today had a postive Covid test result.

“As a precaution, and despite none of our strict social distancing and safe working guidelines being breached, we have decided that no one from yesterday’s show returns until they’ve been tested and declared completely safe to do so.”

Before joking: “You should’ve seen the look of disappointment on the faces of these three when I walked into the building rather than Gary this evening.”

Lineker was in place last night as Chelsea took a 1-1 draw away from Real Madrid, as were Rio Ferdinand, Joe Cole and Steve McManaman.

Lineker joked after the game: "On way home from covering the game and expecting to be intercepted by N'Golo Kante."