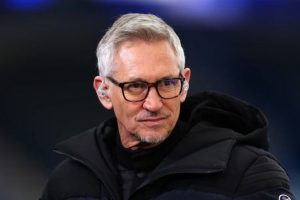 Gary Lineker has claimed it would be a ‘sad twist’ if Manchester City’s 5-0 victory over Arsenal is the final straw for Mikel Arteta as manager. The Gunners were thrashed 5-0 by Pep Guardiola’s Premier League champions as their nightmare start to the campaign continued.

Guardiola’s former City assistant Arteta is now under huge pressure heading into the international break after an embarrassing afternoon at the Etihad Stadium.

Goals from Ilkay Gundogan, Rodri, Gabriel Jesus and a double from Ferran Torres left the Gunners rooted to the bottom of the league table without a single goal or point.

Many fans have lost patience with the inexperienced Spaniard after a performance that lacked any direction or intensity.

And Match of the Day presenter Lineker has suggested it would be ‘sad’ if the huge defeat to City turns out to be the final nail in the coffin for Arteta.

“It would be a sad twist if it’s the game against Pep Guardiola and Man City that turns out to be the straw that breaks the camel’s back for Mikel Arteta,” he tweeted at full-time.

Arteta’s cause was not helped by Granit Xhaka’s reckless challenge as the Gunners were left with 10 men for around 55 minutes.

The 39-year-old was frustrated with his midfielder’s sending off and the manner of the performance thereafter.

“Really painful. For me it was a clear punch on Callum’s face, the referee allows it to go, we are 2-0 down and after the red card we had a mountain to climb,” he said.

“I am angry [about the red card] because of the consequences that it had to the team. I must say the line we are being judged with is really thin, because we had some actions like that in the last two Premier League games, and nothing happened.”

On convincing fans that he is the right man at the Emirates, he added: “When you lose games it’s impossible, but you saw we had 3,000 fans today and the way they reacted to the team and the club with the support they gave, the conditions, that’s why we all went to applaud. I am really proud of that.

“I am sorry we could not give the result, and we have to fix it.”

Meanwhile, City boss Guardiola has no doubts about his former associate’s credentials and has backed him turn things around with the help of returning players.

“I don’t have any doubts. He is so strong, he will recover, he will analyse and I am pretty sure he will be back on track,” Guardiola said.

“We know in our jobs, especially in the big clubs like Arsenal or Manchester City, always when you don’t win there are rumours.

“He helped us a lot. He helped me a lot to achieve what we did together and I learned a lot.

“I feel that he taught me many things that we can use right now.What we are now as Man City as a team, it’s thanks to him for the job he has done.

“But we cannot forget he is playing with five or six players injured – Thomas Partey, Ben White and many of them.”