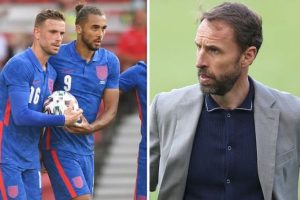 England manager Gareth Southgate has taken a critical view of Jordan Henderson stealing a penalty off Dominic Calvert-Lewin in Sunday’s friendly win over Romania. Southgate has hinted he will not allow a situation like that to arise at this summer’s Euro 2020 tournament.

England beat Romania 1-0 at the Riverside in their final match before the opener against Croatia next Sunday.

Marcus Rashford’s second-half penalty was the only goal of the game.

Calvert-Lewin then won a second penalty for the Three Lions but with Rashford off the pitch, the taker had to change.

Calvert-Lewin grabbed the ball but had it taken off him by Liverpool skipper Henderson, who saw his effort saved by Florin Nita. 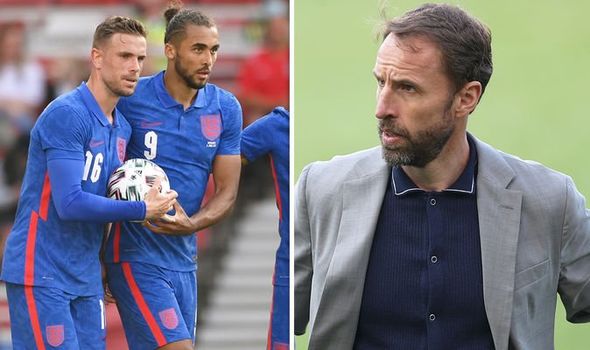 Southgate confirmed after the match that the Everton star was next in line to take it and he would “pull rank” next time his players did not follow his instructions.

“We had Marcus Rashford on penalties then James Ward-Prowse but both came off,” Southgate told ITV.

“We expected Dominic Calvert-Lewin to take it and I was expecting Hendo to go over to him and let him take it. We will pull rank next time.”

It was Henderson’s first competitive appearance since February following the groin injury he suffered with club side Liverpool.

The 30-year-old played the second 45 minutes but it remains to be seen if he will be fit to start against Croatia.

Victory over Romania means England have won both pre-tournament friendlies 1-0 but Southgate was not overly impressed with the performance.

He added: “Yes, we had chances to make it more comfortable but so did they, the first half we did not work hard enough without the ball, we were too stretched and did not press well.

“After half-time, I thought we improved and it was helpful we went to 4-3-3 later and I have to say it was a good exercise, players needed the minutes and learned a lot from the game. Good to win.” 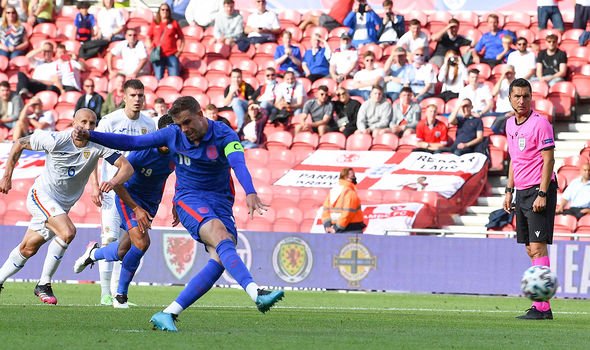 But Southgate refused to be drawn on whether the Aston Villa star had done enough to start next weekend.

“We have a lot of competition in those areas of the field and he has had an important contribution to win the penalty,” Southgate said.

“He is in the frame with several others.”

Meanwhile, Rashford captained his country for the first time and was delighted to do so.

“It is definitely a great moment for me (being captain),” the Manchester United striker said.

“It is something you dream of when you are a kid. Today I accomplished that.

“It was difficult. We had to stick together and work. It was challenging defensively. But we created a lot of chances.

“We did well from set-pieces both attacking and defensively. Ultimately that is what won us the game.”