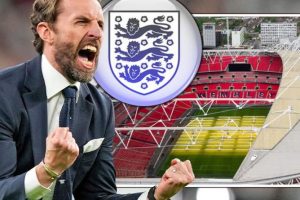 Gareth Southgate has moved swiftly to tie up his England future by signing a new contract until December 2024.

The Three Lions boss put pen to paper on a two-year extension that nearly doubles his money within hours of Manchester United announcing the sacking of Ole Gunnar Solskjaer.

Southgate’s name has been mentioned among the candidates for the United job and the indication that United were only in the hunt for an interim manager indicated that they would be prepared to wait for the right long-term candidate.

However, the much-touted agreement to extend his old deal beyond the end of next December’s World Cup final was finally put in place, with Southgate’s assistant Steve Holland also agreeing terms alongside him.

Southgate said: “I am delighted Steve and I have been able to extend our stay in our respective roles. It remains an incredible privilege to lead this team.

JUST IN: Man Utd disaster with blockade in place for Zidane and Pochettino

“I would like to take this opportunity to thank FA chief executive Mark Bullingham, technical director John McDermott and the board for their support – and of course the players and support team for their hard work.

“We have a great opportunity in front of us and I know they and the fans are all excited what this squad could achieve in future.”

The FA have made no secret of their desire to keep Southgate on board for longer since he led England to the Euro 2020 final in the summer, with England’s men reaching the last two of a major tournament for the first time since 1966.

Southgate, though, was determined to put any negotiations on hold until England had secured qualification for next year’s World Cup finals in Qatar – an achievement they clinched in style with the 10-0 demolition of San Marino.

The new term means there will be nothing hanging over his future at the tournament itself as he will already be committed to leading England’s qualifying campaign for the Euro 2024 finals, which start in March 2023.

All being well, the new contract period will also take in that summer tournament in Germany.

Rather than end the deal then, sources at the FA say both parties were keen to add on the few extra months after that to take the arrangement right through to December so that another major tournament would not be overshadowed by questions about the manager’s future.

Southgate himself plans to explain the agreement in more detail in a press conference at 1.30pm today.

United will now have to take Southgate out of consideration for the vacant position.

Reports have indicated that Zinedine Zidane and Mauricio Pochettino are the frontrunners to take over from Solskjaer.

But other names have been linked with the Old Trafford hot seat, with both Erik ten Hag and Brendan Rodgers seen as options.

Michael Carrick takes up the position as interim boss for the time being while the club search for a temporary replacement until the end of the season.