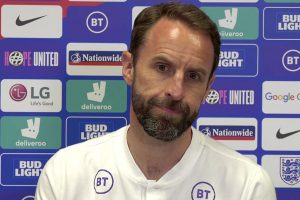 Gareth Southgate has told England fans to blame him if his Three Lions fail at the Euros.

England will go into the tournament as one of the favourites to win and end the nation's 55-year wait for a major trophy.

Southgate led his side to the semi-finals of the World Cup in Russia in 2018 when no-one expected him to.

But he knows three years on, fans now live more in expectation than hope – and that he has to deliver the goods.

Reaching the last four this time around might not be good enough, considering England will play almost all of their games on home soil at Wembley.

Not reaching the latter stages will be regarded as failure and Southgate knows the buck definitely stops with him – instead of his players.

He said: "Yeah, it probably will. I think we're realistic about that, we have to live with that expectation.

"We know the excitement around the team and it's great, we're now relevant. Expectations were lower (in Russia). We've got some exciting players now and I don't think these players are at their peak, by any means.

"I think when I look at some of the players working with us it's so exciting for England in the future. For the fans and future England managers who will work with players like Jude (Bellingham), who is going to be here for a long time I think.

"But, yeah, that's the challenge. I've got to try to manage the expectations for the players, I accept the situation as a manager, there's expectation, I have to deliver.

"We have to deliver as a group of staff. It's not about me, in terms of if we can be successful. But, of course, it’s about me if we fail. No problem. That's the gig."

Win, lose or draw, Southgate insists he will take full responsibility and wouldn't dream of blaming his stars if things go wrong.

He said: "It's always on me as a coach. If you want to be a coach that dismisses performances as purely down to the players, then I don't think you're doing your job.

"When we lose games, I always look at myself first. That's my mindset. That's what I've got to try and do with all of the players.

"We've got 26 players here and to win the tournament we need to get the best from that group. I think we've done that over the last four years, now we're going to have do it again over the next five to six weeks."

England kick off their tournament preparations with two warm-up games in Middlesbrough, starting with tonight's match against Austria before facing Romania on Sunday.

None of those involved in the Champions League final will be available to face Austria, but Southgate has backed those Manchester City stars left shattered by defeat to Chelsea to put the heartbreak behind them in time for the Euros.

He added: "I have left those guys. I think sometimes you need to work your way through those feelings. I think it would be different if it was like the Nations League, where we had players reporting two days after the game.

"There was no time to emotionally recover. We are all assuming it is the Manchester City players who need lifting, but maybe we will have a bigger issue with Chelsea players, because their feeling of success may make the City players arrive more motivated and with a different level.

"That will be a very individual thing. We are obviously looking forward to seeing the players and we are delighted for the players that won. And we need to commiserate with the players who did not quite get there, but I am sure they are all ready to play their part for England now."