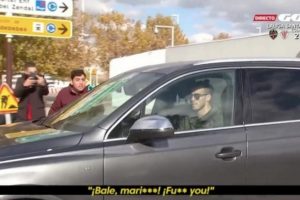 Gareth Bale was sworn at and had a marker pen thrown at him as he left Real Madrid's training ground on Friday.

Cries of "F*** you" could be heard as he was leaving the Valdebebas facility ahead of Real's game with Grenada this weekend.

Bale will not be available for the match after he sustained yet another injury on international duty with Wales.

That appears to have angered some members of the Los Blancos support, who gave him both barrels – plus a marker pen – as he departed the club's training facility.

The 32-year-old former Tottenham star has a calf injury which he picked up on his 100th cap against Belarus last Saturday and is set to miss the next three weeks.

He also sat out the 1-1 draw with Belgium in midweek as Rob Page's side secured a home World Cup play-off semi-final in March.

Bale has endured another stop-start season at Real and has not played for the club since the end of August because of a hamstring injury sustained in training.

Should Gareth Bale return to the Premier League? Let us know your thoughts in the comments section below.

So far this season he has featured more times for Wales than the La Liga giants, a fact that has irked supporters, as shown by Friday's events at Real's training ground.

Indeed, pundits in Spain have long accused Bale of putting country ahead of his club.

The former Southampton player infuriated fans in 2019 after the Dragons qualified for Euro 2020 by brandishing a flag which read: "Wales. Golf. Madrid. In that order."

Earlier this week, Marca journalist Jose Luis Hurtado claimed that Bale was making fun of Real Madrid due to his lack of enthusiasm for club versus his availability for his country.

Hurtado wrote: "Bale is making fun of. It's nothing new. He has been doing it for years…