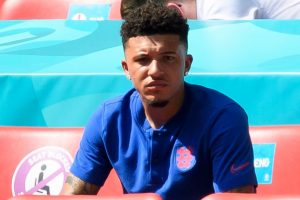 Jadon Sancho’s expected arrival at Manchester United could pose real problems for the progression of Amad Diallo and Facundo Pellistri.

Both teenagers joined the Red Devils last year as Ole Gunnar Solskjaer looked to the future.

After missing out on top target Sancho, big money was invested in the two youngsters.

A combined figure of £46m was put behind the signings of right-sided forwards Diallo and Pellistri.

Borussia Dortmund star Sancho, though, now looks poised to finally complete his move back to Manchester.

A bid of £67m was rejected by Dortmund for the ex-Manchester City youth last week, but the two clubs are just £10m apart in their valuations now.

Personal terms have been agreed with Sancho, according to the Manchester Evening News, so what would his transfer mean for United’s young talents?

Sancho would obviously be prioritised at right-wing in the first-team, meaning few chances would fall the way of Diallo and Pellistri.

Diallo has already provided fans with glimpses of his potential, having made eight appearances across all competitions for United in the 2020/21 campaign, scoring once in the Europa League too.

What should Manchester United do with Amad Diallo and Facundo Pellistri for the 2021/22 season? Let us know in the comments section.

Pellistri, meanwhile, has not featured for the senior team yet and spent the second half of last season on loan at Alaves in Spain.

12 La Liga appearances will have done him good, but Sancho is on another level to the pair despite being just 21 himself.

If Diallo and Pellistri, who will be desperate to impress Solskjaer in pre-season before Sancho would likely arrive after his break following the Euros, do stick around at Old Trafford beyond the summer, Solskjaer will have things to consider.

Changes in their positions and making the pair more versatile so they can get game time could be an option.

Carabao Cup fixtures will offer opportunities, but with United putting big focus on the Champions League too, chances will be limited.

Loan spells may ultimately be considered for both, and even permanent sales are not beyond the realms of possibility if United stand to make a profit this early in their careers.