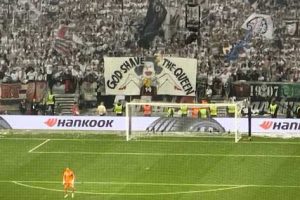 Frankfurt fans unveiled a distasteful banner of the Queen during their crushing 1-0 win over West Ham in the Europa League semi-final second leg last night.

Needing to overturn a 2-1 deficit on enemy territory, the Hammers had their work cut out from the get-go, but the task got even harder when Aaron Cresswell was sent off mid-way through the first-half. The Bundesliga side opened the scoring just six minutes later and the tie was as good as over.

In the end, West Ham got a good licking – but they weren't the only ones. The home fans decided to add insult to injury by taking a swipe at Her Maj (and her v*j), holding up a giant banner with the words 'God shave the Queen' (some razor-sharp wit, there) along with a vulgar cartoon of the British sovereign getting … 'seen to' by a Frankfurt player.

Despite the unsavoury imagery and sentiment, most on social media saw the funny side.

"Meant it as offence, came off as banter," one fan tweeted.

"That's rich coming from the country with the hairiest women," another said, while a third wrote: "Joke's on them, she's German."

"Bring that flag to the final, lads," a Rangers fan posted.

West Ham boss David Moyes got himself sent off with a few minutes to go after booting the ball at a ball-boy in frustration. He apologised after the game, saying: "The ball boy left it short nicely on the volley for me. I apologise for it. It didn't hit him, I think I bent it past him."

Do banners like this have a place in football? Let us know what you think in the comments section.

With little left to fight for, West Ham's attention now turns back to the Premier League, with finishing in a Europa League spot their top priority, given that qualifying for the Champions League is now mathematically impossible. And if they manage to leapfrog Manchester United into sixth, who's to say they won't be back here next year?