Frank Lampard may have to swallow his pride after Everton sacking 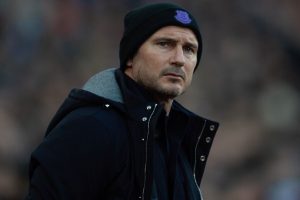 Did he know? Lampard asked for patience in last Everton press conference

Owners appoint managers but it is results that get them sacked. It’s why England’s footballing centurions have often been given one or two chances at football management but seldom three and never four.

Highly-skilled individuals, team players, ambassadors and leaders. It just so happens that the greatest players the nation has ever produced have an appalling track record when it comes to management. Now Frank Lampard possibly has one last chance to prove himself to be the exception to the rule – however celebrated he was as a player.

Nine players have been capped 100 times for the Three Lions and most have had the sort of glittering, lead-by-example careers that might single them out for managerial success. David Beckham and Ashley Cole have never bothered – at least not in the direct line of fire.

Peter Shilton, Bobby Charlton and Billy Wright each had a single stint with Plymouth, Preston and Arsenal respectively. Wayne Rooney and Steven Gerrard have so far each had two goes only so far.

Bobby Moore had three attempts, but all of them were ill-fated, at Oxford City, Eastern AA in Hong Kong and Southend United. When Lampard is offered another job he will become the most capped player since Bryan Robson to be given more than three lives.

His trio of spells at Derby, Chelsea and Everton had enough moments of triumph to ensure that. But he may have to swallow some pride and drop down a division – and the pressure seems on him to really make this one count.

Management, you see, is so much different from wearing a shirt with pride, clapping your hands encouragingly and leading by example. There are dark arts, too, which so often enable canny lesser talents to become the most successful managers of all.

He is eloquent, educated and experienced in the game, but there are big concerns about other key elements that go into making a winning gaffer. There are doubts about his man-management even if the transfer embargo at Stamford Bridge enabled him to spend 13 months boy-managing.

It was all, though, put into rather stark context when Thomas Tuchel came in and showed what was really possible with the squad at Lampard’s disposal. His early achievements in getting Derby to the play-off final were heavily bank-rolled and he was able to jump ship at just the right time.

Now Everton has been something of a car crash from start to finish – undeniably not of Lampard’s making but certainly not of his repairing either. And that’s the rub.

Those handing out the jobs are only starstruck so many times. Eventually, they want the man who served under Jose Mourinho, Harry Redknapp, Carlo Ancelotti and Guus Hiddink and picked up their lessons. TV punditry is there to pick up those that haven’t.