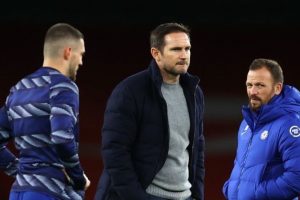 Frank Lampard held a secret meeting with the players and staff at Chelsea in a desperate bid to turn around their poor form before his “super, super harsh” sacking, his assistant Jody Morris has revealed. The Blues legend’s reign was brought to an end after 18 months in charge in January, with former PSG coach Thomas Tuchel replacing him in the dugout.

The west London club’s decision to axe Lampard was met with heavy criticism from the club’s supporters, who regard Lampard as one of their best-ever players.

The Englishman had guided the club through a difficult period having succeeded Maurizio Sarri as head coach, with the Blues handed a transfer ban in 2019 by FIFA.

Their prized asset Eden Hazard was also sold to Real Madrid in a £130million deal, leaving Chelsea with a difficult task of qualifying for the Champions League.

But Lampard turned to the club’s academy stars, such as Mason Mount, Tammy Abraham and Reece James, to provide the spark they needed to secure a top-four finish and a place in the FA Cup final.

Lampard oversaw a summer of spending in 2020 to the tune of £220m as the Blues signed rising stars such as Kai Havertz, Timo Werner and Ben Chilwell.

Chelsea looked like title contenders when they climbed to the summit of the Premier League in December, even despite Havertz and Werner’s struggles to adapt to English football.

But the 42-year-old paid the price for a poor run of form, which included five defeats in eight games, when he was sacked after their win over Luton in the FA Cup.

Morris had worked as Lampard’s assistant at Derby and followed him to Stamford Bridge to rejoin Chelsea, the club where he came through the academy system when he was a player.

And he has shed light on how Lampard devised a plan for the next “eight or nine games” to turn around their season, before he was ruthlessly axed by owner Roman Abramovich.

“I don’t want to plead poverty here, because I was incredibly lucky to go back to Chelsea,” Morris said, speaking on the Off The Hook podcast with Jimmy Bullard.

“But we had a transfer ban and then the global pandemic we had to try and navigate through. It was tough.

“We were top in December and sacked in January, so it shows you how quick things can change in football.

“You have to take that on the chin, that’s just the nature of the game, especially at Chelsea.

“But the one thing that was hard was that Frank was having meetings in the lead up to when we left, he had three meetings that were class and we were actually having meetings with staff, and we plotted out the next eight or nine games. They were all winnable.

“And we were all sitting there going ‘listen, we know we’ve been through a spell but one decent performance… the way things had been going, we definitely went through a six-week period where we underperformed — Arsenal away, Everton away was really poor.

“But we absolutely believed we could turn it around.”

As a former player and youth coach, Morris was under no illusions about the expectations at Chelsea after Lampard had strengthened the squad with high-profile signings.

He remains adamant that the Blues could have turned things around and felt that it was a “super, super harsh” decision to show his close friend Lampard the door.

But Morris reserved praise for Tuchel, who transformed the ailing Chelsea squad into a formidable team that went on to win the Champions League — just five months after Lampard’s departure.

“There’s never a good time [to be let go]. But it is one of those things at Chelsea, things like that can happen,” Morris said.

“Do I think it was harsh? Absolutely, I thought it was super, super harsh.

“But at the same time, I remember when we got let go and I spoke to a load of my Chelsea mates and I said ‘I’d go for Tuchel’.

“We’d heard rumblings about Chelsea’s interest and a bit of that in the days leading up to it. Then when you see what they went on to achieve in the Champions League, [you see] that he’s a top quality manager.

“I still felt there was an opportunity for us to turn it around considering the problems we had in the 18 months with the transfer ban and pandemic. But that’s football.”

When discussing the reasons behind Chelsea’s sudden drop in form that saw them slip from top of the table to ninth, Morris was keen to show examples of how other top sides, including Manchester City and Liverpool, both suffered from dips in form.

“You’re always gutted and disappointed to be sacked and moved on,” he said.

“Frank deserves credit for saying that we were definitely going to go through spells of things like not gelling because we had players coming through the door, the pandemic, the training ground was totally empty.

“So for the players to settle in and gel, it was probably the most difficult period in football.

“You only need to look at some other teams’ spells, Man City’s start, the spell Liverpool went on where they lost more games in a certain period at home than over several years. Everyone was going through a bad period.

“The pandemic has to have played a part in something and having no fans in the ground was devastating.”