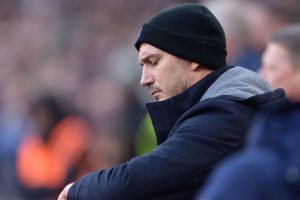 The high points could be counted on one hand but the low points would need a calculator.

Which is fitting as the axe fell for Frank Lampard at a club where doing complicated maths is the only way players seem to arrive now. When looking at the results, it’s clear to see why the former Chelsea midfielder has been handed his P45.

Everton have now won just one game in 14 and are second from bottom of the Premier League. Lampard, 44, has been in charge just less than a year but has managed just 12 wins in 44 games across all competitions.

That’s enough for any manager to get sacked at any club. Lampard knows he cannot complain. He didn’t even last a full 12 months but is this now an impossible job?

Lampard was given a dressing room full of players signed when seven other managers were in charge. He wasn’t given the transfer budget that others such as Ronald Koeman or Marco Silva were afforded.

Instead, he was charged with keeping Everton in the Premier League last season while the club ran a review of how it has been doing business and how more than half a billion has been blown in the Farhad Moshiri era.

Who should Everton appoint next? Have your say here

Director of football Kevin Thelwell came in, reform was supposedly on the cards, but money remained tight thanks to previous poor spending.

But with sponsorship links with Alisher Usmanov’s businesses severed owing to Russia’s invasion of Ukraine, it would only become even trickier for the financial gymnastics to be done.

Richarlison was sold to Tottenham but his goals were not replaced. Neal Maupay was brought in for £15m. He has scored once in 15 appearances. But is that a surprise when he scored just nine last season for an in-form Brighton side going places under Graham Potter?

There was some sort of foundation put in place with the arrivals of James Tarkowski and Conor Coady. Amadou Onana looks a clever purchase and Idrissa Gana Gueye seemed a sensible acquisition, although his form has been below that of the player who had been on Merseyside before going to PSG.

Lampard will wonder whether maybe with a better goalscorer a couple of early-season defeats may have been draws and draws might have been turned into wins.

The impending arrival of Arnaut Danjuma on loan has come too late to bring the goals that could have saved Lampard. But that is all ifs and buts.

Lampard will also know he made mistakes. There were times the wrong team was picked or the substitutions didn't work. He’s been around football long enough to know that this is a results business. They haven't come.

There were big home wins against Manchester United and Chelsea last season. While the former Chelsea and Derby boss can look back on that moment when safety was secured against Crystal Palace last season with great fondness. It was a big success.

He went home that night and sipped on a glass of red wine hoping it would be the platform to build on. But before the hangover from those celebrations would even clear, he should have known that would not be so straightforward.

He admitted himself earlier this month he is not a “miracle worker” but it seems the Toffees need a magician. Everton is a club in the middle of a civil war. The fans want the board out and the mood has never been more blue on their half of Merseyside.

There is a squad littered with players who aren’t up to the challenge of keeping the Blues in the top tier. There’s sure to be a few managers keen on the task, but it is not an enviable one.

Lampard has failed at Everton but he shouldn’t be seen as a failure as not many would succeed at a club in such a sorry state.