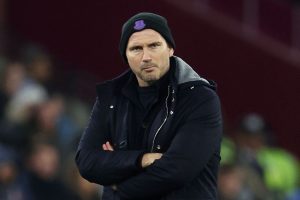 Frank Lampard reportedly banished Abdoulaye Doucoure from Everton training after the pair clashed shortly before the manager was sacked.

The Toffees parted company with Lampard on Monday after less than a year in charge at Goodison Park, with Everton second bottom of the Premier League and two points from safety. Just days before he was sacked, Lampard had a heated row with Doucoure, which caused the midfielder to be forced to train on his own, according to the Daily Mail.

The pair are said to have clashed in the dressing room following the home defeat to Southampton earlier this month.

READ MORE: Frank Lampard sacked by Everton but wasn't a failure due to way club is run

Doucoure, who had been an unused substitute for the match, later continued the row at Everton's training ground last week, causing Lampard to banish him from the first team.

He has since trained on his own and was not part of the squad which travelled down to London to face West Ham on Saturday. Prior to his dismissal, Lampard had hinted that he was unhappy with the attitude of some of his players.

Speaking in his press conference last week, he explained: “I had things to say because from my point of view in the position we are in, we have to fight and be ready for the fight. If the players in the dressing room are disappointed we lost then that's good.

Who should replace Frank Lampard as Everton manager? Let us know in the comments section below “If they want to fight and be a good team-mate, not think about themselves, think about the team and try to get the result the next week and train with great intensity, whether they are starting or not, that is all I want.”

Doucoure is out of contract at Everton in the summer, although the club have the option to extend his deal by a further year. He has been linked with a move to Fulham before the end of the January transfer window.

It is unclear whether he will still be at the club come their next match against Arsenal on February 4. Everton hope to have a new manager in charge for that match, with Paul Tait and Leighton Baines taking training until Lampard's successor is appointed.

Marcelo Bielsa and Sean Dyche are the current bookies' favourites to be the next Everton manager as the Toffees look to avoid losing their Premier League ever-present status.