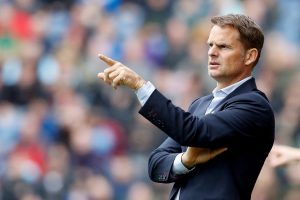 Holland boss Frank De Boer is confident his preferred 5-3-2 system will serve the squad best as they prepare to open their Euro 2020 campaign against Ukraine in Amsterdam.

De Boer took over the Oranje after Ronald Koeman left for Barcelona in September 2020, with the team having qualified as runners-up to Germany in their group.

Former Inter Milan and Crystal Palace boss De Boer, who had a spell at Major League Soccer side Atlanta United following his early departure from the Selhurst Park hot seat, continues to face debate over his tactics.

With Holland having suffered a 4-2 defeat away to Turkey in their 2022 World Cup qualifier in March, De Boer has found his style under the microscope.

A plane was flown over the Dutch training camp in Zeist with a banner which read: “Frank. Play 4-3-3”.

De Boer, though, remains determined to get the best out of a talented squad using his own approach.

“This is just someone who has an opinion and has shown it that way.”

The Holland coach continued: “We always try to play dominant football and that’s what we want with this system.

“I think 5-3-2 sounds negative, with 3-5-2 you already have fewer defenders. We want to get our hands on the game, which means your wingbacks are always quite high.

“I think with this set-up we have the best people in the right places. Players who have played great all year.”

Captain Georginio Wijnaldum feels the squad are gaining confidence in the set-up.

“This is a system that not everyone has played, for some it is new,” said the midfielder, who will join Paris St Germain after leaving Liverpool at the end of his contract.

“Everyone is used to playing 4-3-3, so you have your preference, but this system has been well received by the players.

“We saw in the matches what we did well and what we didn’t do well and we started working on that, which gives confidence: things that went badly went better during the training sessions.”

De Boer, already without key defender Virgil Van Dijk as the Liverpool player continues his recovery from a serious knee injury, confirmed Matthijs De Ligt would not be fit for the match at the Johan Cruijff ArenA because of a groin issue.

Goalkeeper Maarten Stekelenburg is set to start ahead of Norwich’s Tim Krul.

Ukraine topped their qualifying group ahead of Euro 2016 champions Portugal.

Head coach Andriy Shevchenko knows the team have a lot of expectation to live up to.

“We do not need additional incentives. Footballers understand the importance of these games,” he said. “This is a dream for us, a dream we want to realize while playing in the championship.

“We understand all the difficulties that will await us (against Holland), but we are ready for them.”