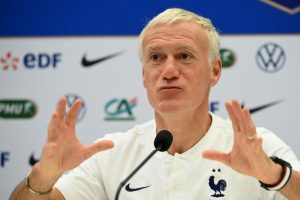 France manager Didier Deschamps responded to a claim by Jose Mourinho that France are expected to win Euro 2020 this summer by bringing up the Portuguese’s unsuccessful spell in charge of Tottenham Hotspur.

World Cup champions France are the pre-tournament favourites but Mourinho added to the pressure by insisting, “They have to win it. If not, it is an unsuccessful Euros.”

“I cannot see any weakness,” Mourinho added in his column for The Sun. “If I had to say one team to win it, I will say them – because the group of players is fantastic.”

Deschamps, who led France to the final of Euro 2016 before winning the 2018 World Cup in Russia, was asked about Mourinho’s comments and replied by referencing his recent sacking from Spurs. Mourinho was dismissed in April days before the Carabao Cup final after a dismal run of form saw Spurs’ title challenge fall away.

“I thought the same thing about his Tottenham team, but it did not end up happening like that,” Deschamps said.

“We are favourites due to the status of world champions. It is not a pressure, it is the reality, we will not flee the debate on the presence of France among the favourites of the Euros.”

France face Portugal, Germany and Hungary in the tournament’s “group of death”, with Deschamps’ side opening their campaign against Germany in Munich on 15 June.