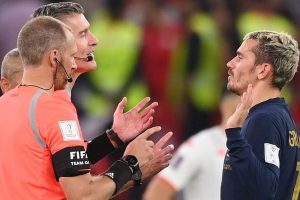 France have lost their appeal to have their World Cup defeat to Tunisia overturned after Les Blues felt that Antoine Griezmann’s late equaliser was ‘illegally’ ruled out. The Atletico Madrid man thought he had levelled the game in the last minute with VAR initially giving the goal before deciding to reverse their decision.

France had struggled in their final Group D match against Tunisia falling behind in the 58th minute to a Wabhi Khazri strike. They thought they had scored the equaliser in the 99th minute when Griezmann struck with the referee initially appearing to give the goal when he signalled for a kick-off.

However, after a lengthy stoppage, the goal was ruled out by VAR for offside despite the fact the last touch had been from Tunisian defender Montassar Talbi before it fell at the attackers’ feet. Many French television viewers were unaware that the decision had been given with domestic broadcaster TF1 ending their coverage at the time.

France’s complaint was not about the offside decision itself even though it was controversial. Their appeal was over the application of the VAR protocol with Les Blues believing referee Matthew Conger had already restarted play, meaning a review could not be initiated.

Straight after the final whistle, France demanded the result be overturned on a point of principle given it would make no difference to the overall group table. Les Blues finished first while Tunisia came third something that would not have changed had the game been drawn.

The appeal has been dismissed within five days by the governing body releasing a short statement today which read: “The FIFA Disciplinary Committee has dismissed the protest submitted by the French Football Association in relation to the Tunisia v. France FIFA World Cup match played on Nov. 30.”

No reasoning was offered for the decision but it is likely to come from the wording within the VAR protocol which reads: “In principle, a match is not invalidated because of … review(s) of a non-reviewable situation/decision.”

It is unlikely that Didier Deschamps will dwell too much on the decision with the France boss having bigger issues to focus on now. Les Blues will face England in the quarter-finals as they seek to become the first nation to win the World Cup in consecutive years since Brazil did it in 1962.

France secured their place in the last eight with a comfortable win 3-1 over Poland on Sunday. Olivier Giroud opened the scoring before Kylian Mbappe wrapped up the game with a double. Robert Lewandowski netted a late consolation from the spot with the last kick of the game. The quarter-final against England will kick off at 7pm on Saturday with the game shown live on ITV1.