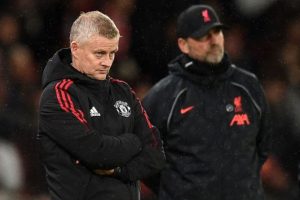 Ole Gunnar Solskjaer’s departure from Manchester United on Sunday has thrown up plenty of speculation over who his replacement could be. Michael Carrick will take charge for the time being, but it remains to be seen who will come in on a long-term basis. Express Sport takes a look at four wildcard options.

A former United team-mate of Solskjaer’s would replace the Norwegian if ex-France international Blanc was to come in and take the reins.

Blanc finished his playing days at Old Trafford after a move from Inter Milan in 2001, winning the Premier League in his last season as a player before retiring.

Having won Ligue Un four times as a manager – once at Bordeaux and three at Paris Saint-Germain – Blanc has a good portfolio to take over United.

And as a player who knows the club very well, he could be prised from Qatari club Al-Rayyan where he is currently in charge.

Lopetegui has been one of Spain’s best managers over the past decade, rising to prominence after being appointed as Porto manager in 2014.

He accrued a 67.95 per cent win-rate in Portugal, earning plaudits before being sacked after a spate of poor results.

He was appointed as Spain manager before controversially being sacked during the World Cup after announcing he would join Real Madrid, but again was sacked after just three months after a poor run of form.

Yet a revival at Sevilla in recent years where he won the Europa League could see him put onto the shortlist of managers for United chiefs to consider.

Fonseca has been linked with many jobs in England over the last few years.

Linked with the Everton job back in his Shakhtar Donetsk days, the Portuguese ended up at Roma, before he was replaced by Jose Mourinho.

Tottenham and Newcastle had both been credited with an interest in him in recent months following their managerial vacancies.

With a focus on defensive football as opposed to attacking prowess, Fonseca could be the perfect option to come in and sort United’s frailties at the back.

And due to his free agent status, cost would also be a huge factor for United to appoint him.

Bruce has the same pedigree as Solskjaer and Blanc in terms of playing careers at United, with Bruce having won three Premier League titles and three FA Cup winners’ medals at Old Trafford.

He has had a long managerial career too, although in 23 years of management he hasn’t won a major trophy.

After his sacking by Newcastle in October, Bruce will cost next to nothing in terms of wage compared to some of the superstar names United have been linked with.

And his United links could be coupled with his defensive stabilities in a bid to keep United in the hunt for European football.