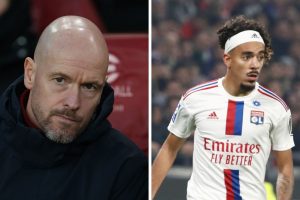 Manchester United could hand Chelsea a taste of their own medicine this summer by hijacking multiple deals, including a swoop for Lyon’s Malo Gusto. The Red Devils are expected to be busy again at the end of the season as Erik ten Hag ramps up his Old Trafford rebuild.

Ten Hag wants to bolster a handful of positions in his second summer transfer window as United boss.

United are reportedly lurking in the background as part of a three-way transfer tussle for Brentford goalkeeper David Raya.

Chelsea and Tottenham Hotspur are also eyeing the Spaniard’s signature this summer, but it’s no surprise why Ten Hag is interested.

Raya meets the quota for a ball-playing goalkeeper and, entering the final year of his Brentford contract in July, is likely to be available for a cut-price fee.

United can blow Chelsea and Spurs out of the water and lure David de Gea’s long-term successor to Old Trafford.

Chelsea are stepping up their pursuit of Gusto in the January transfer window, seeing an initial offer rejected by Lyon.

The 19-year-old right-back is understood to have agreed a contract with the Blues, but United have also made their play.

Reports claim Ten Hag has told Gusto to wait until the summer to make a decision on his future when United have the budget to launch a pursuit.

The Dutchman could view him as the future of the right-back position in his squad, despite Diogo Dalot’s sublime season.

Arsenal have reportedly made Declan Rice their priority transfer target this summer, with the West Ham United captain open to a move.

The 24-year-old is expected to finally depart the London Stadium after long-standing links to a heavyweight move elsewhere.

And while Arsenal are said to be ahead of Chelsea in the race for his signature, United could reignite their interest and add him to their ever-improving midfield.

But whether he meets the profile of midfielder Ten Hag wants to add to his ranks after the capture of Casemiro remains to be seen.

United are said to have had the chance to sign Enzo Fernandez for just £6m before he completed a £14m move to Benfica last summer.

But the Red Devils passed on the opportunity and Chelsea are now intensively pursuing his signature this month.

If he remains in Lisbon for the remainder of the season, United can return to the frame and trigger his £105m release clause to seal a long-term replacement for Christian Eriksen.

Champions League football could be crucial to his future decision, and it’s currently looking more likely to be available at Old Trafford than Stamford Bridge.