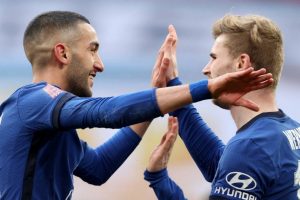 Chelsea pulled off a signature Thomas Tuchel performance to beat Manchester City in the FA Cup semi-final on Saturday.

The Blues were as solid as usual at the back, and rarely gave City a whiff of an opening.

Going forward, they were effective in possession and used the pace of Timo Werner to attack space left by Pep Guardiola's side's high line.

Chelsea thought they'd taken the lead through Hakim Ziyech after the playmaker slotted a Timo Werner pass home, but the goal was ruled out for offside.

However, in the second half Chelsea took the lead through a carbon copy of that disallowed effort, as Werner again set up Ziyech who took advantage of City goalkeeper Zack Steffen's poor positioning to tap home.

Here are four things Tuchel got right as Chelsea progressed to the final.

Reports in recent weeks have suggested Chelsea will be willing to allow Ziyech to leave this summer in a swap deal for Jules Kounde.

However, the Morocco international put in one of his best performances under Thomas Tuchel in the win over City.

Playing as an inside forward, Ziyech scored the first goal of the gam – which was disallowed – and tapped home the second, which counted.

The playmaker wasn't afraid to drop deep to collect the ball and ping it around to dictate possession, and gave Tuchel a selection headache with Werner, Kai Havertz, Mason Mount, Christian Pulisic all vying for three attacking places in the side.

Chelsea's former record signing Arrizabalaga has struggled for game time under the Blues current manager and his predecessor, Frank Lampard.

The Spaniard is clearly void of any real confidence, and needs game time in order to recover it.

It's fair to say Tuchel threw him in at the deep end against the Premier League champions-elect, but he had a fine game and will have regained some of his self-belief.

Having been used as Chelsea's 'cup goalkeeper' this season, Arrizabalaga will be hoping minutes in the Premier League are to follow.

Werner, like Arrizabalaga, has clearly struggled with his confidence in recent weeks and months.

The striker led the line against City in what was clearly a tactical decision from Tuchel to get at the high City back line.

During the first half Werner looked sharp, driving at the back line and creating space. The forward twice combined with Ziyech to create goals – though only one was allowed.

The £53million man's performance gave fans an insight into what they can expect going forward.

Keeping the faith in Kante

N'Golo Kante had a superb game in the middle of the park and was one of Chelsea's standout performers.

After a dull first 45 minutes for both sides, Kante really came into the game in the second half.

With Chelsea ahead, Kante was all over the pitch mopping up any loose balls and driving the ball forward.

The midfielder barely put a foot wrong and seemed to connect with every pass as he helped carry the Blues to victory.