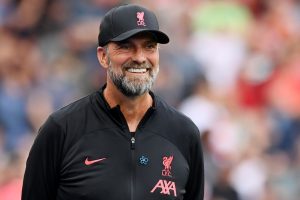 Jurgen Klopp will be grinning like a Cheshire cat tonight after his Liverpool side emerged victorious over Manchester City in the Community Shield at the King Power Stadium.

The trophy will be heading to Anfield this season and while the competition is usually seen as less important than the others, it gives an indication of where each team is at. With the two teams likely to tussle it out in the Premier League, this is a psychological victory for the Reds more than anything.

City are undoubtedly the favourites to retain their crown this season having won four out of the last five Premier League titles but Liverpool will be breathing down their necks the entire way. And Klopp will know that on Saturday he got it right more often than not against his old counterpart Pep Guardiola.

Liverpool came flying out of the traps against City and did not give them a moment to breathe, forcing errors from deep and awry passing further up the pitch. It spoke volumes that Erling Haaland, on his competitive debut, made just three touches in the opening 25 minutes.

It is no surprise to see the Reds ramp it up from the first minute, it is a staple of Klopp's tactics since arriving at Anfield. While it is brave to do so against City, it proves that high-octane football is the best antidote to Guardiola's tiki-taka style.

Trent Alexander-Arnold's opener was by no mistake with Liverpool constantly hitting City's left side through the right-back and Mohamed Salah. Joao Cancelo was left dizzy by the Reds duo while Rodri did not close Alexander-Arnold down quick enough as he unleashed a shot that beat Ederson.

Guardiola might rue the decision to lose not just Oleksandr Zinchenko, but Raheem Sterling and Gabriel Jesus. While the two might not have fitted into his plans anymore, their work-rate down the wings allowed Liverpool's full-backs to have free rein.

There might have been question marks going into this match on how Liverpool would cope without Sadio Mane, who left for Bayern Munich this summer. However, Diaz has answered that in full with another sensational display showcasing his speed, skill and technicality on the ball – breezing past defenders with pace and guile.

Having signed him in January might have been the best decision Klopp has made in recent years, giving the Colombian a nice easing-in period to allow him to take on the mantle of one of Liverpool's best players over the past couple of decades. Fantasy managers might be scrambling around trying to get the former Porto star in their teams after his Community Shield display.

A star is born

When the line-ups were read out, everyone was anticipating Darwin Nunez's name to be on the team sheet as the battle between him and Haaland will no doubt become a subplot throughout the new campaign. So there was some disappointment when it transpired that the Uruguayan was named on the bench with Roberto Firmino named in his place.

Liverpool fans cheered their club-record signing as he came on, though, as he made an instant impact against City, earning the penalty after his header hit Ruben Dias' arm. And they absolutely loved it when he scored the third goal for the Reds, with his name chanted out across the King Power Stadium.

And where Klopp could have done better…

With the game getting out of City's grasp, Guardiola brought on the big guns to try and rope his team back into the game – and it worked. The introductions of Phil Foden and Julian Alvarez had a major impact, particularly the latter who grabbed the equaliser 12 minutes into his debut.

But Klopp might have to shelve some of the blame after failing to react to Guardiola's changes that saw the momentum switch City's way. Liverpool emerged victorious through Salah's penalty but there were some undoubted nerves in the red dugout.